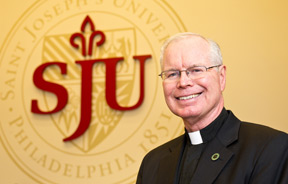 Jesuit Father C. Kevin Gillespie was elected the 27th president of St. Joseph’s University by its board of trustees Nov. 10.

A St. Joseph’s alumnus (1972) who currently serves as associate provost for University Centers of Excellence at Loyola University in Chicago, he was introduced to St. Joseph’s students, faculty and staff at a gathering of the campus community Nov. 11.

“It is truly an honor for the Board of Trustees to introduce Father Gillespie as the next president of St. Joseph’s University,” said Robert Falese, chairman of the university’s board of trustees. “He is an accomplished and acclaimed scholar with a commitment to academic excellence and a fervent dedication to advancing his alma mater and Catholic, Jesuit education in the region and indeed around the globe.

“He is the right Jesuit to lead St. Joseph’s forward and into the future at a time of great momentum for the university.”

In his current position at Loyola University in Chicago, he leads five academic centers and, for the past year, has simultaneously served as interim dean of the School of Social Work, managing a successful transition to a new permanent dean.

Prior to that (1996-2010), he served as the first director of the master’s program in Spiritual and Pastoral Care and founded LOGOS (Loyola Overseas Gestures of Solidarity) at Loyola College in Maryland. He entered the Society of Jesus in 1975. He has served on the board of St. Joseph’s since 2006.

“The extraordinarily hardworking search committee more than fulfilled the goals of the Leadership Statement for the position of president of St. Joseph’s University,” said Daniel Hilferty, university board vice chair and chair of the search committee. “In Father Gillespie we have a recognized scholar and a leader with a rich background of academic experience and vision for academic distinction as well as a keen understanding of the challenges facing higher education in the 21st century.”

Father Gillespie succeeds Jesuit Father Timothy R. Lannon, who served as St. Joseph’s president from 2003 until earlier this year, when he left to assume the presidency of Creighton University in Omaha, Neb.
Father Gillespie will officially take over as president on July 1, 2012.  Senior Vice President John W. Smithson will continue in his role as interim president of the university until then.

“I am honored and truly humbled to be coming home to serve my alma mater, St. Joseph’s University, as its 27th president,” Father Gillespie said.  “It’s an exciting and wonderful opportunity to work with faculty, students, staff and administrators, as well as alumni, trustees and friends who share a commitment to its Jesuit values and to boldly advancing the university into the future.”

NEXT: Archdiocesan students to rally for school choice in state capital