Advent of a new era 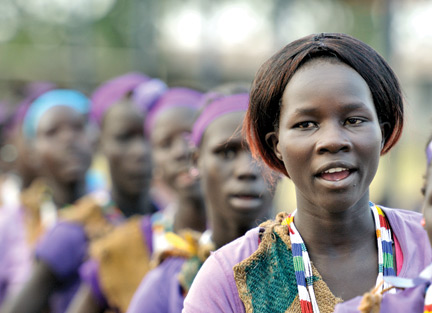 Members of Christ the King Catholic Parish in Malakal, Southern Sudan, sing and dance in procession before Mass. A peaceful community of the majority Christian South, it is located near the border with the mostly Muslim North.

It’s the world’s newest sovereign nation, having received independence from Sudan on July 7, after decades of civil war. South Sudan has many challenges ahead, but Vincentian Father Manuel Ginete, 63, believes it will overcome them.

For years religion was a bone of contention in Sudan. The northern, more populated area, with 30 million people, is mostly Arab by ethnicity and 97 percent Sunni Muslim. The less populated South with 8 million people is mostly Black by ethnicity with a majority Christian. More than half of the Christians are Roman Catholic while Anglicans form another large group.

A flash point for the Christians was an attempt by the Sudanese government to impose Islamic law on the whole country, Muslims and Christians alike.
The new country, South Sudan, was carved out after a brokered peace agreement followed by a vote.

“People are working very hard to control their own destiny,” Father Ginete said. “I’m sure they were religious before, but war has brought them closer to God.”
It’s also a new challenge for Father Ginete himself. After 45 years with the Vincentians, South Sudan is his very first mission assignment. He joined the Congregation of the Mission (Vincentians) because he wanted be a missionary, but his superiors had other needs for him.

Father Ginete, who was born in the Philippines, entered the Vincentians at age 18, and after his studies and ordination in the United States, he was assigned to teach at the new seminary opened in his home country.

Over the years he became rector of the seminary and Provincial Superior for the Philippines and for the most recent six years was the Rome-based delegate of the Superior General to the Vincentian Family worldwide.

Finally, this September his vocational dream was realized.

“I wanted to be a missionary in Africa, and South Sudan is the place for me,” he said while visiting Philadelphia to honor his previous commitment to preach for the Nov. 14-22 Solemn Novena and Feast Day Mass at the Central Association of the Miraculous Medal in Germantown.

Despite oil reserves that should help the fledgling nation in the future, South Sudan is among the poorest countries in Africa, and much of the arable land is not farmed because of fear of land mines left behind after years of conflict, Father Ginete said. When these mines are cleared, it will probably help the situation, he believes. Health care is very poor, and many children still die from malaria or measles.

The oil situation is complicated and at this point there has not been a revenue-sharing agreement signed between Sudan and South Sudan. Also, the new nation, at this point, has no refineries. Oil must be shipped to Sudan or elsewhere for processing. Another problem is that much of the oil is located in the border areas where there is still unrest.

Father Ginete, who is based in Juba, the capital of South Sudan, sees little signs of religious friction in that region but said there is some in areas along the borders.

“I must admit I felt very safe wherever I went, because everywhere you go a priest is respected, not only by Catholics but by others,” he said. “There is so much respect because the priests stood by the people during the war and some were killed.”

Some of the current violence has nothing to do with Islam. South Sudan, like much of Africa, is comprised of many tribes, and tribal loyalties can cause problems. Also, some areas of the new nation have been terrorized by the Lord’s Resistance Army, a radical Christian group based in nearby Uganda.

At this point, Father Ginete explained, Sudan and South Sudan still have a single bishops conference, based in Khartoum, the capital of Sudan, and headed by Cardinal Gabriel Zubier Wako.

The only seminary has its lower division in South Sudan, but the upper division is in Khartoum.

Father Ginete, who expects to be in South Sudan for at least three years, is the only Vincentian priest in the entire country, although there are sisters of related congregations. Most of the clergy are African, and many of those who are not, like himself, came to the country as part of SSS (Solidarity with South Sudan), a consortium of a number of congregations that have sent missionaries to help rebuild the Church in the new nation.

While there are flare-ups of violence, “I can say there is a great resolve on the part of the South Sudanese government, and they are not going to be deterred by any provocation from the north,” Father Ginete said. “I look at South Sudan as a place of opportunity. But they need help in so many ways, in terms of investment and a lot of things. I’m optimistic for the future.”

NEXT: Treats for the Troops