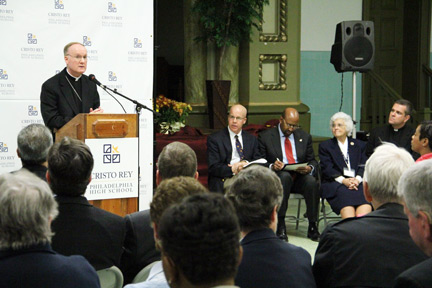 Auxiliary Bishop Michael J. Fitzgerald speaks during a Nov. 22 press conference announcing the opening of a new Cristo Rey High School on the campus of Our Lady of Hope Parish in North Philadelphia.

Cristo Rey means Christ the King in Spanish, which tells you right up front what the brand new Cristo Rey Philadelphia High School on North Broad Street will stand for.
Scheduled to open next August at what was once Holy Child School, it is a brand-new concept to Philadelphia although it replicates 24 similar Cristo Reys around the country.
It really is a unique concept. Think of prep schools where rich kids need not apply. Families have to show they could not afford a similar education elsewhere, before a prospective student is accepted.

Also, think of a hybrid between a college prep school and a commercial high school, where one day a week the students gain hands-on experience at various corporate offices around the area.

The beauty of it all is that the work experience makes Cristo Rey financially feasible.

The various companies pledge one or more entry-level slots with a salary of, at this point, $30,000 a year. Each slot is divided among four students, and the pay goes directly to Cristo Rey to help offset their tuition.

“It costs about $12,000 to educate a student, and about $7,000 is supplied by the work that the students do,” said John McConnell, president of Cristo Rey Philadelphia, at a Nov. 21 announcement ceremony. For the balance, the school will rely on fundraising and a monthly contribution of $200 by the parents, although it is expected many of the parents will not be able to afford $200 and will receive further subsidies.

“We hope to be the catalyst, the springboard that leads to a life of dignity, a life that almost all of us have,” said McConnell. “We are not a charter school; we do not rely on federal subsidies and we do not rely on families. We rely on businesses to support the school, but not through charity.”

The Cristo Rey concept was pioneered by Jesuit Father John Foley in Chicago in 1996, and while each of the Cristo Reys is fully independent, they all adhere to the guidelines established in Chicago.

While McConnell himself is Jesuit-educated and a former board chair at St. Joseph’s Preparatory School, the official sponsors in Philadelphia are the Oblates of St. Francis de Sales and the Sisters, Servants of the Immaculate Heart of Mary, two congregations with a long history in Catholic education in Philadelphia.

While interest in establishing such a school goes back at least five years, the impetus was the 2010 closing of Oblate-conducted Northeast Catholic High School. After study, it was deemed impractical to open the Cristo Rey at the Northeast Catholic site, but plans proceeded with the former school building at what is now Our Lady of Hope Parish.
“It’s a wonderful venture,” said Auxiliary Bishop Michael J. Fitzgerald, who oversees Catholic education in the Archdiocese. “We pledge our support and prayer to the administration, the new faculty, staff and students.” Bishop Fitzgerald also conveyed the good wishes of Archbishop Charles Chaput, who was already aware of the Cristo Rey concept because of a successful Cristo Rey in the Denver Archdiocese.

At this point the coed school will accept 125 freshmen for a school term beginning Aug. 6, 2012. Adding one class a year, it should reach full capacity in 2015. The longer school years as well as longer school hours are necessitated by the work-study aspect. Applicants are not limited to the City of Philadelphia itself, and are open to students of all races and creeds.

So far 17 positions have been obtained for the 30 or so needed for this year’s initial class, including five from Comcast. Other sponsors include Philadelphia Insurance Companies, VWR, Henkels & McCoy, US Liability Insurance Group, CB Richard Ellis, Saul Ewing and the City of Philadelphia.

“Improved graduation rates and quality education, especially for the city’s neediest students, is essential for Philadelphia’s future,” said Philadelphia Mayor Michael Nutter, who pledged an internship slot in his office for one of the incoming freshmen.

Michael Gomez, who is currently principal at St. Joseph’s Prep, has signed on as principal for the new school.

NEXT: Thanks to the Knights: Food