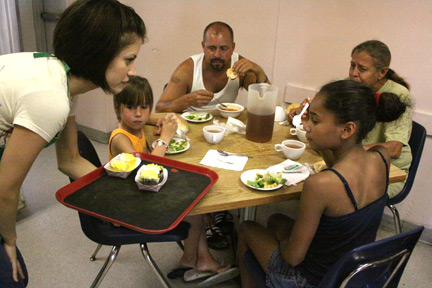 A volunteer serves dessert to a family enjoying dinner at St. Francis Inn in Kensington in this CS&T file photo.

However, there are five women whose commitment to the poor makes a beautiful difference. Together with four friars, these women form the team directing St. Francis Inn, located in “the second hungriest place in the United States.”

Sister Mary Augustini, a Franciscan Sister from New York, arrived in Kensington 24 years ago. Previously, she had worked with marginalized persons in Buffalo and Manhattan.

She noted, however, “Kensington was different in the prevalence of homeless persons who were also mentally ill and addicted.” She also explained that “trying to do as Jesus did — helping the downtrodden — is spiritually fulfilling.”

Barbara Salapck, from Lake Erie, began her volunteer ministry in 1990 after a professional career that had spanned 18 years. Her commitment in Kensington has involved visiting jails and hospitals, and driving persons to rehab facilities.

Some years ago, she helped an abused woman with two children. Today, the woman is self sufficient. One son is a fireman; the other, a college student. She further noted that “we are called by the Gospel to walk with people in their time of need.”

Sister Leslie Birks, a Sister of St. Francis of Philadelphia, also came to the Inn in 1990. Her background included a graduate degree, teaching physics and chemistry, and working with the homeless in Boston.

She identified herself as a “dependable person” — “I am always here!” After guests return from prison, “I am here!” When guests have emergencies, “I am here!” She lives in the neighborhood: “I am here!”

Karen Pushaw, alumna of the University of Pennsylvania Law School, practiced corporate law for 10 years. Her motivation to give “direct service to the poor” resulted from seeing homeless people in the concourse of Suburban Station in Philadelphia.

“These people,” she realized, “were living under station platforms in a “cardboard city.” She volunteered at the Inn for two years and joined the team in 1993.

The most recent team member is Judy Stachecki who arrived in 2003. She had worked as a purchasing director for a chemical company in North Carolina. After retirement, Judy helped medically fragile children and AIDS patients. She also served with Mother Teresa’s Sisters in Calcutta.

One day Judy saw the film, “A Table for Four” which described St. Francis Inn. She arrived as a volunteer and was later invited to join the team. One of her many duties is to answer the doorbell that rings non-stop all day.

The Catholic identity of the Inn is evidenced by daily Mass and Evening Prayer, annual retreats, an outdoor St. Francis mural, a statue of Mary in the dining room, and living the Gospel: They turn no one away.

Within the Inn there hangs a framed text: “There is no telling some people that they are walking around shining like the sun!” How better to describe the five women who make such beautiful differences in thousands of lives!

PREVIOUS: Thanks to the Knights: Food

NEXT: Priests gather to reflect on pastoral duties