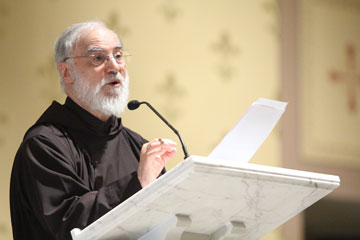 As the Church in America continues to shoulder the cross brought about by clergy sexual abuse, and as the local Church of Philadelphia faces the possible merging and closure of parishes and schools due to the declining number of active priests to staff them, the role of the laity is becoming more and more prevalent. That growing role was the theme of presentations given by Capuchin Father Raniero Cantalamessa at St. Mary Magdalen Church in Media on Feb. 12 and 13.

Father Cantalamessa focused on the co-responsibility of priests and laity in renewing the Church, echoing a recent address from Pope Benedict XVI to the clergy and laity of Rome in which the Pontiff said, “It is necessary to improve pastoral structures in such a way that the co-responsibility of all the members of the People of God in their entirety is gradually promoted, with respect for vocations and for the respective roles of the consecrated and of lay people, and this demands a change in mindset concerning lay people.” Pope Benedict went on to say that lay people must “no longer be viewed as ‘collaborators’ of the clergy, but as ‘co-responsible’ for the Church’s being and action, thereby fostering the consolidation of the mature and committed laity.”

Appointed as papal preacher by Pope John Paul II in 1980, Father Cantalamessa preaches regularly to the Pope, as well as to cardinals, bishops, prelates of the Roman Curia and the general superiors of religious orders. He frequently speaks at international and ecumenical conferences and rallies. It was hoped that he would speak at the Archdiocesan Men’s Conference on March 3 at Archbishop Ryan High School, but his schedule did not allow that. “We didn’t want to miss out completely on the opportunity to hear him, so when his schedule allowed him to come in February, we booked him immediately,” said Msgr. Ralph J. Chieffo, pastor of St. Mary Magdalen Parish.

Capuchin Father Raniero Cantalamessa speaks about the role of the laity at St. Mary Magdalen Church in Media on Feb. 12 and 13

“We, as priests, should be ‘talent scouts’ of charisms among our parishioners, and do all we can to promote them,” Father Cantalamessa said. He described the laity as being like the “nuclear energy of the Church,” meaning that one person can leave a church having been inspired, and ‘contaminate’ two others, who in turn can each ‘contaminate’ two others, and so on. He also admitted that it is easier for priests to be “pastors rather than fishermen,” as it is more easy to “care for those who are already here than to go out and seek those who may be un-churched.” Using the image of the Good Shepherd, Father Cantalamessa emphasized that priests must leave the 99 to seek out the one who is lost.

Ritamarie Smedile, a member of St. John Chrysostom Parish in Wallingford, attended the presentation, and greatly enjoyed Father Cantalamessa’s teaching. “He spoke with a beautiful simplicity and clarity,” she said. “Nothing was complicated or over my head.” Visiting from Argentina, Patricio Lynch Pueyrredon was also moved by the presentation. He said, “Father’s testimony about his own life and struggle to surrender himself totally to the Lord resonated with me too.”

Father Cantalamessa highlighted two primary conclusions regarding the renewal of the Church by her priests and lay people. First, we must “receive the risen Jesus in our hearts,” he said. Emphasizing that for many Catholics, Jesus is knocking – not to get in their hearts, but to get out, sometimes they “lock Jesus up under ‘house arrest,’ and don’t allow Him to invade the other aspects of our lives, nor do they share Him with others.”

Second, we “need the Holy Spirit, for without the Holy Spirit, God remains far away,” he said. Father Cantalamessa explained that Christ loves His bride, the Church, despite her struggles, and that God receives glory, even in the weakness and imperfections of humans. He stated, “Children often criticize their mother for having wrinkles, but they seem to forget that they probably caused those wrinkles!”

It is the co-responsibility of the priests and the laity, through the grace and guidance of the Holy Spirit, to renew the Church, our mother, so that those wrinkles may represent the lessons learned from human shortcomings, Father Cantalamessa added.