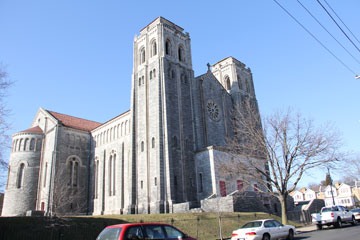 Seven parishes in Northwest Philadelphia and four in Coatesville, Chester County, are nearing a Feb. 15 deadline for submitting a recommendation to Archbishop Charles Chaput to merge, consolidate or close some of the parishes.

Although the process of in-depth evaluation at the parishes was originally to have extended into May, the needs of the area required a more aggressive timetable for implementing a plan for the parishes, according to a letter from Msgr. Arthur E. Rodgers, coordinator of archdiocesan planning initiatives, dated Jan. 30, to the pastors of those parishes.

The letter described a Jan. 11 meeting between Auxiliary Bishop Daniel E. Thomas and Msgr. Steven P. McHenry, respectively the bishop and dean with responsibilities for the region, and the seven pastors to clarify the process.

After the meeting the concerns of pastors were related to Archbishop Chaput who called for consultation with them regarding the timetable for planning.

Most of the pastors, according to the letter, decided that “pastoral planning go forward as originally proposed.”

The letter to the pastors detailed a process for parishes under study in the region.

Parish pastoral and finance councils are currently considering a variety of plans that would call for closing or consolidating some churches. The written recommendations of the parishes are expected to be completed by Feb. 15, though a one-week extension may be requested, the letter said.

At this time Bishop Thomas and Msgr. McHenry are meeting with pastors and members of parish councils to discuss details of their study and reflect on parishioners’ comments.

After Feb. 15, the parish recommendations will be discussed among the pastors and a Strategic Planning Committee made up of archdiocesan experts in several fields of Church life. The result will be a final plan for the parishes that agrees upon procedures for implementation and “the complexities of the mergers,” the letter said.

The plan will be submitted for consideration by Archbishop Chaput and the College of Consultors and Council of Priests, the top advisory groups to the archbishop, at their scheduled March 23 meeting. Following the meeting, the archbishop will announce his decision on the plan.

If he accepts the plan as submitted or with modifications, the process of merging parish communities and/or closing churches will begin, and be completed by July 1.

In Coatesville, four of the six parishes in PPA 240 are engaged in a similar process within the same timeframe.

The parishes include St. Cecilia, Our Lady of the Rosary (Italian), St. Joseph (Slovak) and St. Stanislaus Kostka (Polish). The auxiliary bishop with responsibility for the Coatesville region and its dean are Bishop John J. McIntyre and Msgr. Daniel J. Kutys, respectively.

A significant Latino population resides in the area, a fact that the parishes are considering as they form their recommendations for parish and church consolidations or closures.

In Northwest Philadelphia and Coatesville, along with five parishes in Manayunk (Philadelphia) and three in Phoenixville (Chester County) that were already announced as under study, pastors and parish councils are planning for possible mergers of parishes.

In all four regions, 19 parishes will experience some form of merger or closure this year, by July 1. Each is staffed by a resident pastor.

Parishes across the Archdiocese are actively planning to deal with – or soon will ‑ shifting demographics of Catholics, declining numbers of priests, financial challenges and the needs of evangelization on the parish level.

The archdiocesan pastoral planning initiative announced in 2010 is designed to address all these factors in a prayerful way that invites the participation of parishioners with clergy.

PREVIOUS: Cardinal Bevilacqua remembered as ‘a good man, a great leader who accomplished many things’