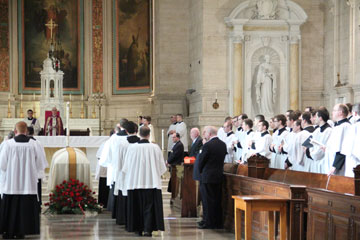 The celebration of a “Stational Mass” for Cardinal Bevilacqua, Mon. Feb. 6; this is a Mass that precedes the final Mass of Resurrection to be celebrated at the Cathedral Basilica of SS. Peter and Paul Feb. 7.

The solemn rites preceding the entombment of Cardinal Anthony Bevilacqua at the Cathedral Basilica of SS. Peter and Paul began Monday, Feb. 6 at St. Charles Borromeo Seminary, his last place of residence, with a private viewing for family, friends and the seminary community.

At 8 a.m. the body of the late Cardinal was formally received at St. Martin’s Chapel by Bishop Timothy C. Senior, and the viewing was held following Morning Prayer.

Msgr. Shaun Mahoney, rector of St. Charles, remembers the late Cardinal as quiet and appreciative of everything that was done for him. “I celebrated Mass for him a few times, and he was grateful for that,” he said.

Patrick “Pete” Costello, who was Cardinal Bevilacqua’s faithful driver for the past 15 years, said, “I’m going to miss him, he was a good man and a good priest; he was my best friend. He never asked anything for himself, he always thought of me and the Church. I’ll miss just seeing him and being with him. I remember my first day, I was so nervous, he came down and shook my hand, and I was never nervous with him again. His death was nice and peaceful, and that’s the way he deserved it.”

Elmer “Bud” Hansen, who with his wife, Eileen, support many charitable endeavors in the Archdiocese, especially remembered an incident that happened 15 years ago in February 2001.

“My son, Bud and his wife had quads at Abington Hospital,” he said. “They were premature, only about nine and a half pounds among them, and there was a question if they would all survive.” It wasn’t possible to take them to church for baptism, so Hansen called Cardinal Bevilacqua for advice. The Cardinal got into his car and drove by himself to the hospital. On that particular day, the Philadelphia area was hit by an unexpected snow storm, and the roads were clogged. It took the Cardinal eight hours to get there, but he made it, Hansen said.

The quads, Michaela Rose, Anna Grace Rose, Chloe Rose (all named for the Little Flower) and Maximilian Kolbe were all baptized, and while the Cardinal was there, he baptized the rest of the Catholic babies in the hospital. The quads are doing fine; they just celebrated their 11th birthday, Hansen said.

“You talk about a friend, we thought the world of Cardinal Bevilacqua; he was a great man of God and I never knew him to be anything but a great churchman,” he added.

Also there to pay final respects were some members of the team of certified nursing assistants who cared for him, including Felicia Marklin, Tish Chance, Colette Downes and Ocilla Rocke. “A nice man, a good teacher,” “compassionate and caring,” “a wonderful man who treated everybody the same,” was among their remarks about the Cardinal.

The seminary viewing was temporarily halted at 11 a.m. for the celebration of a “Stational Mass” for the deceased Cardinal; this a Mass preceding the final Mass of Resurrection which would be celebrated at the Cathedral. Principal celebrant of the Mass was Bishop John McIntyre, and concelebrants included Bishop Daniel Thomas and Bishop Michael Burbidge of Raleigh  who was former secretary to the cardinal and former rector of the seminary.

There were more than a score of priests also concelebrating including Msgr. Joseph Gentili, Cardinal Bevilacqua’s last administrative secretary and the homilist for the Mass. Archbishop Charles Chaput was also present but not concelebrating.

“We celebrate the gift of his priesthood which now extends to eternity,” Msgr. Gentili said. “While about 63 years is a very long time, in reality that does not matter. In God’s eyes every priest is ordained for the same amount of time, and that is eternity.”

Father Gentili spoke personally of Cardinal Bevilacqua, for example his loathing cheese and his voracious reading habits, everything from theological works to novels, murder mysteries, history, even Harry Potter. He spoke of the late Cardinal’s “tremendous love of God and his zeal and zest for life.”

Also “his drive to serve the good of the Church and her members was unprecedented,” Msgr. Gentili said. “He strove to defend the rights of others, for equality and fairness.”

Among the concelebrants was Msgr. John Alesandro, the Cardinal’s oldest nephew.

As a matter of fact, the Cardinal, then only a seminary student, caused a bit of an accident in his life. “I was a year and a half, and he was swinging me around I dislocated my shoulder,” he remembers.

There are many happy memories, too, and many coincidences. Both became canon lawyers and civil lawyers and both loved music. They would get together to play with friends and other priests. “Cardinal Bevilacqua used to play the accordion,” his nephew said.

The two would also sometimes play golf together. “He could have been a good golfer, but his work ethic wouldn’t permit it,” Msgr. Alesandro said.

Msgr. Alesandro himself went on to become president of the Canon Law Society, and he remembers times when they were trying to decide on a speaker, and he said, “How about my Uncle Tony?”

“Who is your Uncle Tony?” the other committee members asked. He’s Bishop Bevilacqua,” Msgr. Alesandro said. After that, “he was always Uncle Tony to the Canon Law Society.”

After the Mass the viewing resumed until Vespers at 4:30 p.m., after which Cardinal Bevilacqua was taken to the Cathedral Basilica of SS. Peter and Paul, his final resting place.

NEXT: In remembrance of Cardinal Anthony Bevilacqua