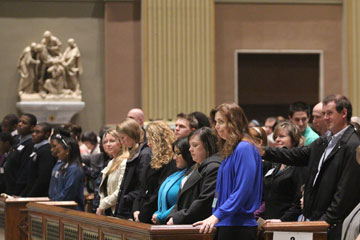 Nearly 800 candidates and catechumens joined the Catholic Church in Philadelphia during this Easter season. Above, godparents place their hands on the shoulders of catechumens during a Rite of Election liturgy Feb. 26 at the Cathedral Basilica of SS. Peter and Paul.

Carl Kelley, 67, regularly attended Mass at St. Raymond of Penafort Parish in Philadelphia with his Catholic wife and raised his children Catholic. Baptized into the Baptist church, Kelley said that for years “my whole being had been drawing toward the Church.”

It took an invitation and some prodding from two parishioners for Kelley formally to begin the process of becoming a Catholic by joining St. Raymond’s Rite of Christian Initiation of Adults, or RCIA, program.

“When it was time for Communion, I felt left out. I would sit back,” Kelley said, referring to decades of not receiving the Eucharist at Mass. “Two people behind me noticed what I was doing all the time, and they asked if I was Catholic and said, ‘Why don’t you become Catholic?’”

That invitation prompted Kelley, who told himself, “Stop sitting on the sidelines, get off the bench, and play the game.”

Kelley was one of 384 candidates in the Archdiocese of Philadelphia who had been baptized in a Christian faith and wanted to be in full communion with the Catholic Church.

The Archdiocese also had 401 catechumens, people who were baptized at the Easter Vigil and fully initiated into the Church.

According to Father Chris Walsh, pastor at St. Raymond, he has seen large numbers of RCIA members in the four years he has been at the parish. This year there were 12 catechumens and one candidate in the relatively small parish of about 600 families.

He attributed the large numbers not to a parish evangelization team but to personal invitations from parishioners and to connections to the parish school.

“Many of the folks going through the RCIA program in an urban area have a Catholic school influence … and had a connection with the school,” he said. The school has many students who are not Catholic, he added, but “baptisms are coming out of the school.”

Father Walsh said the parish is located in a part of the city where many people are not Catholic and have other options in the area, including a few mega-churches.

“People are looking for a church where they feel a part of a community and liturgy that feeds their souls with music and preaching,” he said.

Kelley said he feels comfort now that he is Catholic. Noting that he has had to think about death as a member of the Philadelphia Fire Department, he said the Catholic Church gives hope, relief and comfort about death.

Niki (Crowder) McNally, 34, one of six catechumens from Our Lady of Consolation Parish in Parkesburg, was motivated to become Catholic after her 11-month-old son, Landon, was baptized.

McNally said she wanted to make raising her son Catholic a “family affair” that she could share with her husband. Little did she know when she began classes what a family affair it would become.

Before class one night, McNally suggested to her 19-year-old sister Shawnee Homitz that they attend class together. McNally said after class her sister asked, ‘Do you think they’ll let me join?’” Homitz did, and after several long conversations about the program, their mother, Patty Homitz, joined the RCIA program, too.

All three were baptized at the Easter Vigil. McNally described the experience as overwhelming.

Although McNally said she began the journey for her husband, “after baptism I realized I needed to do this for me, too. I am part of something so big. It has been an amazing journey and it is far from over,” she said.

Keith Kibler, director of RCIA at Our Lady of Consolation, said this year’s program is “larger than normal” for the small Chester County parish.

Since the late 1990s, the Archdiocese has seen increasing numbers of catechumens and fewer candidates, said Maryanne Harrington, director of the Office for Formation of the Laity.

Also, Harrington said, she has noticed that in the case of many young adult catechumens “a lot of times the parents did not baptize their children because they think that when the children are older they will make their own decisions.”

Harrington said many catechumens are evangelized on a personal level through the example of active Catholics in their lives.

“I think that in people’s everyday lives they meet (Catholics) that they have been impressed by,” and then they want to join the Church, she said.