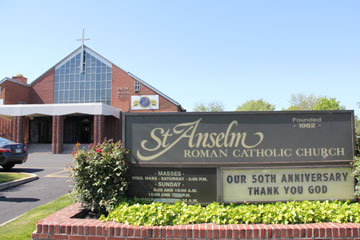 Far Northeast Philadelphia, the last part of the city to fully develop, was still expanding rapidly in 1962 when then-Archbishop John Krol established a new parish under the patronage of St. Anselm, a distinguished medieval doctor of the Church and Archbishop of Canterbury.

Father Edmond Walsh, the founding pastor, celebrated his first Masses at a temporary church on Chilton Road, but very quickly began work on the permanent church/school on Dunks Ferry Road.

School opened under the direction of the Sisters, Servants of the Immaculate Heart of Mary in September 1963, and the first Mass was celebrated in the church on Nov. 23, 1963.

By 1968 when Father Stanislaus Kowal became pastor the school was already the second largest in the Archdiocese, and although an addition was already planned, over the next decade some children attended classes at St. Dominic or St. Martha School, and even in the former Holy Providence School on the grounds of the Blessed Sacrament Sisters in Bensalem.

Because of the great needs of the school, church ornamentation took second place until the arrival of Msgr. Edward Teller as pastor in 1980, and some of it has a story. For example why does the window depicting St. Anselm show him as a smithy? Because it’s really St. Dunstan, another medieval Archbishop of Canterbury (who actually was a metalworker) and was obtained from the St. Francis Vocational School chapel when it was torn down.

Why is the baptistery behind a sturdy iron grill? Because the bronze cover of the font is extremely valuable. It was at the old St. Michael Mission Center, believed to be 16th century from the studio of Bernini, and obtained by Msgr. Teller from the Sisters of the Blessed Sacrament. The iron grill has a history too; that was from the former St. Stephen’s Church. The beautiful stained glass in the rear came from the former St. Ludwig Church, the sanctuary sconces from St. Edward Church and the most recent acquisition, pews from Our Lady of Victory Church.

Because the parish was established when the neighborhood itself was young so were the parishioners; many of them city workers, police, firefighters and nurses, or just families attracted by nearby industry, which explains why the school grew so rapidly.

Cindy McDonald, who went through St. Anselm School and graduated in 1972, is the second of four generations of her family in the relatively young parish. She remembers being bused to St. Martha’s beginning in fifth grade. There were four rooms to each grade with about 45 students each. She also recalls in the years she attended at St. Anselm that whenever the kids met kindly Father Kowal in the hall he would give them a piece of hard candy. The whole neighborhood was wall-to-wall kids. “Back then we had 82 children on our block,” she said.

Fifty years does make a difference, and while there are still young people, they no longer predominate, and that affects ministries.

“Today, with an aging population we see ministry to the homebound, the sick, the dying and the bereaved,” observed Father Thomas Dunleavy, St. Anselm’s pastor, who will celebrate the parish anniversary Mass on April 29.

“These were not necessary in the beginning years when the parish was so young,” he said. “Throughout this 50-year history the people have been ever responsive to the church and school in response to the needs of the time.”

St. Anselm School, with more than 400 students, is still a vital force in the community, offering the quality education along with discipline to make a pleasant environment, Father Dunleavy noted, and among parish programs, the St. Vincent de Paul Society is especially vibrant.

Although she left as a young married adult, she eventually came back. “I raised my children here, my daughter is getting married from here and one of my sons is in the parish. People want to stay and if they go away they come back,” she said.