At 50, St. Hilary’s still a welcoming parish in Rydal 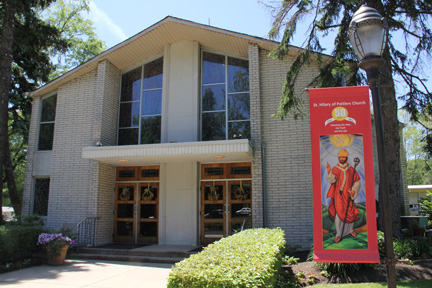 Archbishop John Krol must have been in a theological mood in 1962. Three of the five parishes established that year were named for doctors of the Church.

St. Hilary of Poitiers in Rydal, which is named for a 4th century theologian, was among them. It was founded on June 6th out of territory taken from St. Cecilia Parish in Philadelphia and Immaculate Conception B.V.M. Parish in Jenkintown, with Father John P. Cosgrove as the first pastor.

On May 20, Archbishop Charles Chaput visited to celebrate the joyful 50th anniversary Mass.

When Father Cosgrove arrived he had eight acres of land already purchased by Cardinal John O‘Hara and Archbishop Krol but no buildings, except for an old barn which was unusable, so the early Sunday Masses were celebrated at St. Basil’s Academy with daily Masses at St. Joseph’s Manor.

He wasn’t kidding. Remarkably a church, school, rectory and convent were all completed by December 1963, something really unique – most parishes build piecemeal. The school, under the direction of Mother Regina Perpetua and three other Sisters of St. Joseph initially only utilized four rooms, two grades to a room. But there was also a thriving CCD program and a host of other activities too, according to a history prepared by Sister Ann Gavigan.

Tom Asson and his wife Phyllis were founding members who loved the parish so much they stayed in the neighborhood because of it. “It’s been a blessing in our lives,” he said.

Asson remembers Father Cosgrove would stand by the door and greet everyone by name as they entered and left; he made it a point to know them all. The school was tiny when their sons, Sean and Drew, attended. He estimates there were about 10 kids to a grade.

“We were a diverse parish of all ages, ethnicities and backgrounds,” said Asson, who started the St. Vincent de Paul Society which is still thriving. He credits the success of St. Hilary’s to really good pastors – Father Cosgrove, Father Glynn, Msgr. Michael J. Carroll and now Father Kevin P. Murray.

Agnes (Pat) Pacitti, a parishioner for 33 years, a former parish council member and a member of the parish prayer line, would agree with that. “Each pastor brought his own signature; each one was different and each one was loved and appreciated,” she said. “I think it is through the leadership of the pastors that we never have any problems getting volunteers for activities.”

Father Murray has now been at St. Hilary eight years and counting. He discovered there was one drawback with a parish where all the buildings were erected simultaneously – things break down simultaneously.

“When you show the people what is needed, they respond,” said Father Murray, who is assisted in ministry by Deacon John Hunter.

The parish today has a little less than 1,000 families, and the school is still going strong with about 250 students.

“We have a very active spiritual program; we do Forty Hours, Parish Mission, and Adult Faith Formation Program with guest speakers from time to time,” the pastor said. “We have an active CYO. We recently dedicated a memorial garden and installed a shrine triptych in the church that depicts St. John Neumann, St. Katharine Drexel and St. Hilary. Our music program is very good and includes a fantastic children’s choir. Priests who visit say our greatest selling point is that it is such a very welcoming parish.”

PREVIOUS: Archdiocese welcomes not one, but two new superintendents of schools

NEXT: Former secretary for clergy sentenced to 3-6 years in state prison over role in abuse scandal