Fortnight for Freedom brings focus on challenges to religious freedom

The Fortnight for Freedom, an initiative of the Catholic bishops of the United States, ended on Independence Day after two weeks of efforts to increase awareness among Catholics of threats to religious freedom in America.

Archbishop Charles Chaput provided a fitting end to the initiative by serving as homilist for a Mass celebrated for the occasion by Cardinal Donald Wuerl in the Basilica of the National Shrine of the Immaculate Conception in Washington, DC, on July 4.

In his homily the archbishop spoke broadly about freedom, especially religious freedom.

“We’re free only to the extent that we unburden ourselves of our own willfulness and practice the art of living according to God’s plan,” he said. “When we do this, when we choose to live according to God’s intention for us, we are then — and only then — truly free.”

“This is the kind of freedom that can transform the world. And it should animate all of our talk about liberty – religious or otherwise.”

Archbishop Chaput not only made the case that the state cannot give or take away freedom, but also that religious liberty “is a foundational right. It’s necessary for a good society. But it can never be sufficient for human happiness. It’s not an end in itself,” he said.

“In the end, we defend religious liberty in order to live the deeper freedom that is discipleship in Jesus Christ. What good is religious freedom, consecrated in the law, if we don’t then use that freedom to seek God with our whole mind and soul and strength?

The archbishop concluded by referencing the necessity of the Fortnight in the present and in the future.

“In coming years, we’ll face more and more serious challenges to religious liberty in our country,” Archbishop Chaput said. “This is why the Fortnight for Freedom has been so very important. 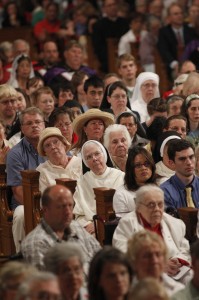 People listen as Philadelphia Archbishop Charles J. Chaput delivers the homily during Mass at the basilica of the National Shrine of the Immaculate Conception in Washington July 4. (CNS photo/Bob Roller)

“And yet, the political and legal effort to defend religious liberty – as vital as it is – belongs to a much greater struggle to master and convert our own hearts, and to live for God completely, without alibis or self-delusion. The only question that finally matters is this one: Will we live wholeheartedly for Jesus Christ?  If so, then we can be a source of freedom for the world.  If not, nothing else will do.”

In the Philadelphia Archdiocese, local efforts to implement the Fortnight’s goals included talks at St. Charles Borromeo Seminary and prayer petitions read last weekend at all Mass at archdiocesan parishes, plus information in some parish bulletins.

The local efforts were spearheaded by the newly formed Office of Life, Family and Laity.

Freedom for a Christian is a gift “in which man is able to become a participant in love,” Cokeley said. “Freedom is not neutral to what is good and right, it is oriented toward the good, and ultimately to God.”

Bozza spoke on the issues of formation of conscience and cooperation with evil.

Powerpoint presentations for both Bozza’s talk and Cokeley’s at the conference are available online, along with many other resources on the issue of religious freedom, here.

Bozza said the activities and information provided by his office “were widely accepted.” In fact, St. Genevieve Parish in Flourtown held a “town hall” meeting at the parish June 27 that dealt with how people could become more active on the issue.

The impetus to the renewed emphasis on religious freedom was the Obama administration’s regulations to enforce the Patient Affordable Care Act, or health care reform legislation, which was enacted in 2010.

Specifically, the “HHS mandate” – a regulation of the U.S. Department of Health and Human Services announced in January 2011 and finalized seven months later – requires Catholic organizations to provide insurance coverage for procedures such as contraception, including use of abortion-inducing drugs, and sterilization, which the Catholic Church teaches are grave moral evils, without a suitable conscience exemption for religious organizations.

The threat to a religious organization’s freedom, including the Catholic Church’s, comes from the mandate that would force compliance with morally objectionable practices under penalty of fines.

Also, the exemption to the mandate would determine which organizations fit the department’s definition of “religious.”

Catholic health care and charitable organizations, for instance, serve all people regardless of their creeds. An exemption to the mandate would apply only to those religious groups that serve or hire primarily their own members.

Bozza said that although currently “no movement is coming from the (Obama) administration” on addressing the church’s objections to the mandate and law suits against it from several Catholic dioceses and institutions are wending slowly through the federal courts, attention is starting to turn toward the November presidential elections.

“We need to (maintain) the focus between now and the election,” he said. “We need to vote in the way that would protect religious liberty.”

NEXT: Of six priests on leave, four cleared to return to ministry