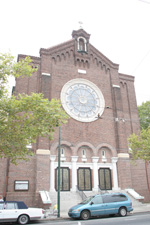 Every parish is unique. Take St. Edmond Parish in South Philadelphia which celebrates 100 years on June 10. It’s probably the only Catholic Church in America built on the site of a former Chinese cemetery. It is believed to have supplied more young men to the Norbertine religious order than any parish anywhere.

Most parishes named for St. Edmund of Abington (or Canterbury) use that spelling. Philadelphia’s St. Edmond’s doesn’t because Edmond Prendergast happened to be Archbishop when it was founded.

It was established June 1, 1912, in the Point Breeze section of the city with territory taken from St. Thomas Aquinas, St. Gabriel and St. Monica. Father John Greensill, the founding pastor, celebrated his first Masses at the Point Breeze Theater, and very quickly broke ground for a school on 23rd Street which also served as a Mass site until a church could be built.

The size of the parish in the early years is shown by the Confirmation record which showed 625 children and 34 adults confirmed in 1918.

With the school came the Sisters, Servants of the Immaculate Heart of Mary, who especially under the guidance of Mother Cyrenia, encouraged many vocations to the religious life.

Although Father Greensill was able to ultimately purchase land of sufficient size at the former cemetery for a permanent church and rectory at 21st Street and Snyder Avenue, it was up to his successor, Father James Duffy, who in spite of the Great Depression, to build the beautiful church where Archbishop Charles Chaput celebrated the centennial Mass June 10.

For years people called St. Edmond’s “the House that Duffy Built,” in honor of the colorful second pastor.

The school peaked at well over 1,000 students and Jean Corsaro Marakowski became a lay teacher (1961-65) and loved it. “My parents were married there,” she said. She and her husband, Michael, settled in the parish and raised their children there, and although no longer living within its boundaries remain members, with Jean an Extraordinary Minister of Holy Communion and Mike an usher.

“St. Edmond’s means so much to me,” Jean said. “Mike had a serious accident in 1985 and Father (Philip) Barr was amazing to us and gave us great support. When our parents died Father Francis Groarke was wonderful.”

Rita Crawford Baldwin was baptized at St. Edmond in 1932, as were all of her nine children. She remembers the school lovingly, especially Sister Mary Jude. When her house caught fire in 1950, Father William Fogarty and Father Edward McLaughlin visited that same day.

“I also remember Father Edward McLaughlin and Father Thomas Bolton. We had great priests, but South Philly is filled with great people,” she said.

Today the parish is smaller, with a bit under 700 families but it is still vibrant, according to Norbertine Father Maurice C. Avicolli, the current pastor. The choir, which for decades has been among the best in the city, “is still strong,” he said.

“Our religious education program is still vital. Our eucharistic ministers, lectors altar servers and ushers do a super job. Our daily Mass in the rectory chapel draws a faithful group and we have singing every day. The sodality is very faithful.

Right now the parish is restoring the beautiful baptistery and the side altars for the upcoming centennial.”

But more important is the outreach, “engaging the youth and the families, and trying to be a positive influence on our neighborhood,” the pastor said, citing the food cupboard that serves anyone in need, regardless of creed.

Father Avicolli credits all the good things happening at St. Edmond’s to the faithfulness of the pastors. And he’s especially grateful for the assistance he receives from Deacon James J. Stewart. “Jim is the other priest I don’t have,” he said, “I depend on him and our good parish staff.”

Deacon Stewart’s family moved in when he was 3 years old, and he went through the school taught almost entirely by Immaculate Heart Sisters for whom he has nothing but good things to say.

“We had four classes for each grade, I think,” he said. “I was one of the altar servers when Cardinal Krol celebrated the 50th anniversary Mass. Father Barr mentioned church ministry to me in the 80’s and eventually the deacon program. I was ordained in 2000.

“The numbers are less today, but it’s still a good parish,” he said. “With the decrease in numbers you get to know the people better.”

NEXT: Needy of St. Agnes, West Chester, get a hand from St. Patrick students