At workshop for catechists, Archbishop Chaput tells how to ‘render unto God’

The 150 or so catechists who attended the Sept. 13 Fall Professional Development Day at St. Charles Borromeo Seminary were in for a special treat – their own catechist for the day was Archbishop Charles Chaput.

His topic — issues to consider in this election year, especially life issues — was at the top of the agenda.

“A presentation by the Archbishop is most worthwhile,” said Father John J. Ames, archdiocesan Deputy Secretary for Catechetical Formation. “I think we recognize issues surrounding life and the Church’s involvement in trying to transform the culture is as important today as ever and so for our catechists and DREs to be familiar with some Church teaching is invaluable.”

It was also a great opportunity for them to experience the dynamic style of the Archbishop up close and personal.

Actually, the book has just been re-released at the suggestion of the publisher, Doubleday, with a new forward and a new cover. In an election year it’s a great read for parish book clubs with a soft cover price of $14, (Amazon $11.20). Royalties for the book, the Archbishop said, are donated to a special fund to assist the poor.

The book, of course, takes its title from the Matthew 22, where Jesus confounds the Pharisees by telling them “Render unto Caesar the things that are Caesar’s and render unto God the things that are God’s.” It was quite clear from the Archbishop’s talk and the question-and-answer session that followed that he believes we owe a great deal more to God than we owe to Caesar.

It is mindless, he suggested, to vote a straight ticket for any party, because no party supports the whole teaching of the Church.

Clearly, there are many issues one must consider before entering the voting booth.

“I could never vote for somebody who favors abortion,” Archbishop Chaput said. “If you can kill unborn babies, who can’t you kill?” If both parties ran a pro-choice candidate, “I wouldn’t vote for either,” he said. 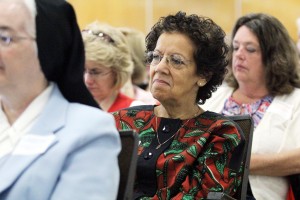 In his answers the Archbishop was especially critical of Catholic legislators, who sacrifice their Christian values in order to receive their party’s nomination and eventual election. And many Catholics who simply vote on party line also share the blame; in his view had they stood up to the so-called elite, when the abortion issue came up, it would not be an issue today. “It’s the quiet Catholics who led us into to this. If they had told their party no, it wouldn’t have happened,” he said.

In short, the archbishop maintains, “We need to be witnesses to our faith in the public square.”

Linda Love, who attended the workshop for Philadelphia’s St. Benedict Parish, said after the session, “He certainly tells it the way it is and his personal conviction is most impressive. It’s what he believes, he doesn’t pull punches and yet he speaks with love. It is very powerful.”

NEXT: Pastor of Ascension Parish suspended for abuse allegations