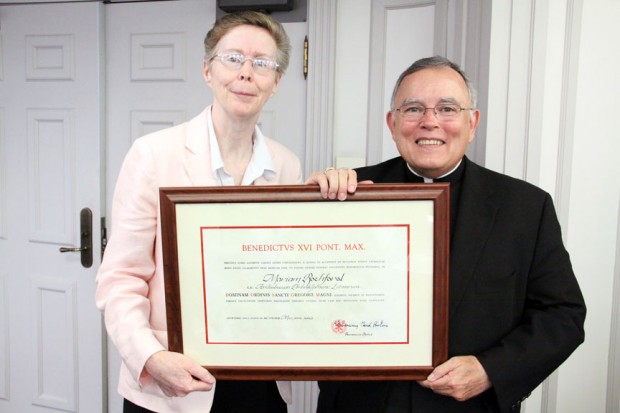 Mary Rochford (left) receives the official documentation upon being named a Dame of the pontifical Order of St. Gregory the Great from Archbishop Charles Chaput Sept. 6 at the Archdiocesan Pastoral Center in Philadelphia. (Sarah Webb)

Mary Rochford, the former superintendent of schools for the Archdiocese of Philadelphia, has been named a Dame of the pontifical Order of St. Gregory the Great by Pope Benedict XVI.

Archbishop Charles J. Chaput presented her the official document from the pope during a meeting Sept. 6 of the Blue Ribbon Commission on Catholic Education at the Archdiocesan Pastoral Center, which Rochford was attending.

“I was shocked,” Rochford said. “It’s a proud moment for me and my family.”

The honor typically is conferred on Catholic diplomats, philanthropists and leaders in business, politics, the arts, and other fields. Through it, the pope recognizes the honoree’s “service already rendered and an invitation from his Holiness to continue a life of exemplary Christian witness,” Archbishop Chaput said in a letter to Rochford.

He added the honor recognizes her “sustained and exemplary witness to the Catholic faith, and service to the Church and her people.”

Rochford joins only a handful of women from the Philadelphia Archdiocese, including philanthropist Josephine Mandeville, civic leager Barbara Travaglini and former archdiocesan administrator Bernadette O’Connell, ever to receive the papal honor.

In fact, at the start of the commission’s meeting Thursday, Bishop Michael Fitzgerald announced he was making a special presentation, and Rochford thought it was for Quindlen. When she learned she would be joining such distinguished recipients of the same honor as Quindlen and the others, she thought, “Oh my Lord, how did I get in this group?” she said.

Growing up in North Philadelphia, Rochford graduated from St. Athanasius School and Cardinal Dougherty High School before earning a degree in elementary education at Chestnut Hill College and a master’s degree at Boston College.

Before joining the archdiocesan Office of Catholic Education in August 1999, she served as a Catholic school teacher and administrator for more than 25 years. She was superintendent of schools from 2008 until June of this year, when she resigned to spend more time with her family.

Rochford actually did not start out wanting to be a teacher, but to be a religious sister. When she joined the Sisters of St. Joseph as a young woman, she accepted whatever assignments the order gave her.

The sisters’ predominant ministry in Philadelphia was and remains education, so that was the work in which Rochford ministered.

While family needs convinced her to withdraw from community life, she stayed in education for almost 40 years, always convinced that she was not only a teacher in service but a model of the Catholic faith, which the papal honor recognizes.

For teachers, “it can’t be just what you say, it has to be what you live,” Rochford said. “You work as hard as you can and know that God is there in all of it.”

PREVIOUS: Archbishop Chaput reflects on his first year in Philadelphia

NEXT: Archbishop Chaput sends letter to the faithful on anniversary