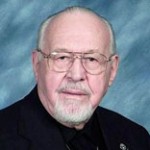 Deacon Wojewadka was born May 14, 1923 near Tarnopol, which was then part of Poland. He was taken from his home by the Russians in 1940 near the beginning of World War II, but later joined a Polish Army unit under British command. As a member of the Polish Independent Parachute Brigade he took part with distinction in Operation Market Garden and was wounded in the battle of Arnheim.

Leaving the military with the rank of major, he studied at various schools in Great Britain and in 1956 immigrated to the United States with his wife Michalina, and earned a degree in business administration from Hofstra University.

He worked on Wall Street for a time, but eventually settled in St. Hedwig Parish. He entered the diaconate program and was ordained a deacon by Archbishop Anthony Bevilacqua on May 29, 1988. He remained in parish service until his retirement in July 2007.

In addition to his parish work, Deacon Wojewadka was actively involved in leadership roles in various Polish-American, veteran and Catholic social organizations.

“As a child I remember going to many Polish functions and my dad would always be making the main speeches,” said his daughter, Lidia Manieri. “He loved his homeland Poland and even after World War II he continued to fight for Polish freedom against the Communist regime through the 1980’s.

“Dad loved his Church,” his daughter said. “St. Hedwig’s was his parish that he loved and served during his ministry. This combined two of Dad’s loves – a Polish church. It couldn’t get any better than this.”

His legacy doesn’t end here, according to his daughter. One friend told how touched she was when she was in the hospital seven years ago and her father visited and brought Communion. Through this inspiration she is now an extraordinary minister of holy Communion herself.

Deacon Wojewadka is predeceased by his wife; in addition to his daughter Lidia he is survived by his daughter Barbara Ostapowicz and five grandsons: Edward, Nicholas, Christopher, Patrick and Robert, of whom he was so proud he gave explicit instructions they should be named in his obituary.

Interment was at Our Lady of Czestochowa Cemetery, Doylestown.