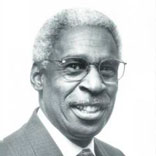 Born Baptist, he was brought to the Catholic faith through the example of his future wife Lenora Robinson. He was actually received into the Church while serving in the U.S. Army and they were married at St. Thomas Aquinas Church in 1950.

While pursuing a career in printing with General Electric, he and Lenora lived in St. Thomas, St. Charles Borromeo and Holy Child parishes, and raised five children — Michelle, Maria, Bill, Monique and Maurice, all of whom went on to advanced degrees in their chosen fields.

Meanwhile he was active in many aspects of his parishes, especially Holy Child, where he worked with RCIA, the Legion of Mary, marriage counseling, novena and whatever else was asked of him.

At the suggestion of his pastor, Bill entered the diaconate program. The only African American in his class, his powerful declamation of the Word earned him the nickname “Rambo of the Ambo” by his diaconate classmates.

He was ordained a deacon by Cardinal Anthony Bevilacqua in 1994, and he served faithfully until recent years when the onset of dementia curtailed his activities.

The rosary, his constant devotion, was replaced by a simple Our Father and Hail Mary with Lenora, who remained his constant companion.

His faith never left him, said Father Efren Esmilla, pastor of Our Lady of Hope. He remembers that when he would bring Deacon Champagne Eucharist or anoint him, Bill would always say, “God bless you.”

“He was a faithful servant of the Lord and he brought a lot of converts to the faith,” Father Esmilla said.

Deacon Champagne’s funeral Mass was celebrated at Our Lady of Hope Church by Bishop Joseph F. Martino. Along with his many friends and family, there were in attendance a number of his fellow deacons and many members of the Knights of Columbus.

He is survived by his wife, Lenora, and their five children.

Interment was at Holy Sepulchre Cemetery.