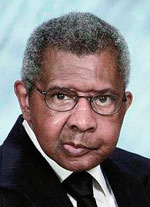 Born in Detroit, Michigan Oct. 7, 1926, he served in the United States Army during World War II, and it was during this period he met his future wife, Bernice Washington. After his military service they settled in Philadelphia, where Deacon Walker became employed at the U.S. Naval Depot, and he also pursued an associate’s degree in accounting at Trenton State Community College.

He and his wife raised three children, a son, James G. and daughters Sharon Lynn (Wadlington) and Karen (Maceia). He is predeceased by his wife and two daughters.

The family joined St. Benedict Parish in 1970 where both James and Bernice became active in parish programs, and ultimately he was asked to apply for the permanent diaconate program.

He was ordained a deacon May 24, 1987 by Bishop Martin N. Lohmuller at the Cathedral Basilica of SS. Peter and Paul.

“I was surprised when it happened, and they interviewed everybody in the family including me before he was accepted,” his son said.

As for the character of his father, James G. Walker said, “He was mild-mannered, very altruistic; he would always give until it hurt and was extremely dedicated. I really started seeing this dedication when he became deacon. He preached with authority, and if the people didn’t say “amen” loud enough he kept making them say it until they did.”

On a personal note, “He kept me straight,” his son said. “I was starting to go with the wrong people, and he got me out of that.”

Father George B. Moore, pastor of St. Benedict, remembers Deacon Walker and his wife were especially involved in social ministry. “They came every day to our food bank for more than 15 years,” he said. “He was a quiet, gentle man and well-loved in the parish.”

Bishop Michael J. Fitzgerald was the principal celebrant at Deacon Walker’s funeral Mass held at St. Benedict Church on Sept. 22. Father Moore was the homilist and Deacon James Mahoney was Deacon of the Mass.