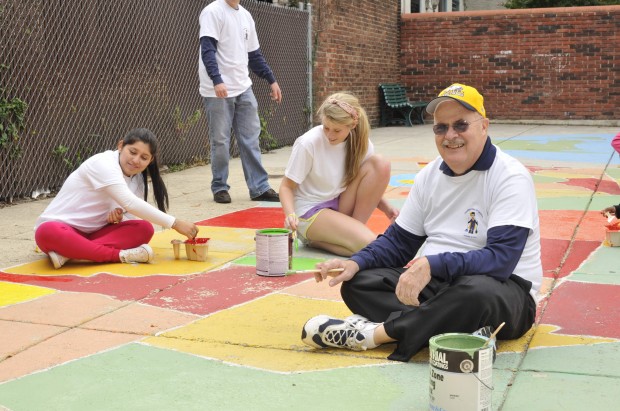 Students, faculty, staff, alumni and friends of La Salle volunteered their time with civic and social organizations at more than 30 sites in Philadelphia, as well as alumni clubs in Bucks, Chester and Montgomery counties.

About 200 graduates, 800 students and 80 faculty and staff signed up for the event.

“Part of our LaSallian heritage is about faith, service and community. As a campus community, we pride ourselves on the service we do,” said Christian Brother Bob Kinzler, director of University Ministry and Service.

In recent years, La Salle students have contributed more than 50,000 hours of service annually to the local community.

“It is truly a blessing and a privilege to offer a Day of Service in the region and around the world as we celebrate our 150th anniversary,” said Brother Michael McGinniss, F.S.C., president of La Salle University. “La Salle is a vibrant and continuously evolving learning community with a bright future.

“The theme of our sesquicentennial celebration is ‘Living the Promise’ – it is our way of saying that while La Salle has grown and adapted to meet the circumstances and needs of the times, we have been faithful to our mission.”

At a LaSalle’s opening convocation Aug. 23, Philadelphia Mayor Michael Nutter presented a proclamation recognizing the university and its anniversary.

Other highlights of the yearlong celebration include Philadelphia Archbishop Charles Chaput accepting an honorary degree during Honors Convocation Oct. 7.

At the Alumni Awards Dinner on Nov. 16, the university will award its Signum Fidei Medal on behalf of Catholic Relief Services (CRS) for its work in advancing humanitarian principles. Accepting the award is Joan Rosenhauer, Executive Vice President for CRS’ United States efforts.

PREVIOUS: La Milagrosa to be sold by Vincentians to benefit order’s retirees