The winding country roads of Limerick host modest homes, small churches and businesses as any town. But now high spires poke out of the Montgomery County landscape as parishioners of Blessed Teresa of Calcutta Parish now worship God in their new church. 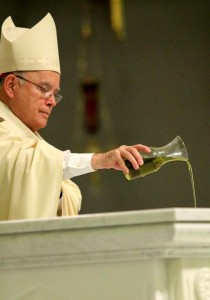 (See a photo gallery of the dedication here.)

The most striking of the recycled artistic and architectural elements from five closed Catholic churches and a Catholic hospital are a towering 37-foot-high main altar piece from St. Boniface Church in the sanctuary and priceless stained glass windows from St. Clement Church. St. Boniface, in North Philadelphia, closed in 2006; St. Clement’s, in Southwest Philadelphia, closed in 2004.

It might seem as though a church was plucked from the 19th century and nestled into the former sod farm of the30-acre parish campus, but parishioners have watched as the modern steel construction church has risen over the past 38 weeks thanks to mostly dry, favorable weather this year.

Father Paul Brandt, the pastor, remembers having not a worry last summer as a violent storm slammed the surrounding area but parted around the church site before regrouping and continuing on toward Philadelphia.

Providence seems to be shining on this parish founded only in 2006. At the time, parishioners from St. Clare in nearby Linfield and St. Peter’s in Pottstown saw their small parishes close, and they joined the families of the fast-developing Limerick area. Members of the newly combined parish community worshiped at both parish churches and St. Pius X High School in Pottstown for larger Sunday liturgies.

By 2008 the first focus for parish life came with the new religious education center, which the pastor quickly reminds visitors is not a school.

While it features a kindergarten-to-eighth grade school that shares all its 12 classrooms with students of the parish religious education program, the most remarkable feature is the child care program.

It boasts six classrooms, some including basinets. The children range from newborns to five year olds, and they learn the earliest forms of education: eating, walking and potty training, before heading to kindergarten and the successive grades.

The child care program, which operates 6:30 a.m. to 6 p.m. on weekdays 12 months of the year, also supports all the parish’s school-age children through the $325,000 the program annually pumps into the education system of the parish. The innovative approach “is the only way we’re going to survive,” Father Brandt said.

And the gymnasium of the school — apology to the pastor, “religious education center” – served as the primary worship site for Sunday Mass at Blessed Teresa Parish. The gym became transformed each Sunday with attractive and simple appointments.

As much as the center has become a point of pride for parishioners, the new church raises it another notch.

The exterior welcomes visitors with a plaza and decorative fountain, leading to the triple arches of the main entrance. From the outside the church’s stone facing and twin spires – a main tower over the entrance and a smaller one directing light down into the church’s sanctuary – make a statement, according to the pastor.

“We are here and we are Catholic,” Father Brandt said. “There’s no question this is a Catholic church.”

Nowhere is this sense more apparent than seeing the church on the inside, where worshipers “have no sense of space or time. You could be in a 19thcentury church,” the pastor said. 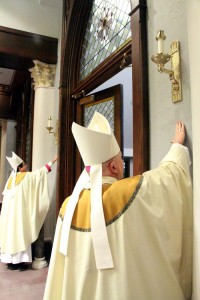 The narthex, the area immediately welcoming people inside, features a baptismal font and a large colored glass and mahogany wall in the gothic style.

The wall and font are from St. Boniface Church, founded in 1866 by German immigrants but recently razed down to a parking lot because its neglected stonework was a falling hazard to passersby.

In the nave of the church the soaring angles of the steel arches and beams, made to look like smooth stone by an innovative use of Styrofoam covering, make the church appear higher than it is. While the nave is relatively shorter in length than a traditional Gothic church, it is more spacious in the two transepts, or side-aisle areas, accommodating more than 1,000 people.

Gothic touches abound in the church, reflecting the churches from which they were drawn.

Wooden confessionals and marble communion rails used for architectural accents came from St. Boniface along with stained glass from the church created by the same Mayers studio that fashioned the windows from St. Clement’s (founded in 1865) that grace their new home at Blessed Teresa.

Murals, holy water fonts and painted statues from St. Peter’s, the pulpit from St. Clare’s used as the cantor’s stand, the main altar and pulpit from Immaculate Heart of Mary in Middleport, Pa., and stations of the cross from the chapel of Mercy Hospital in Scranton, Pa., also contribute to Blessed Teresa.

Many of the pointed-arch motifs in woodwork, glass and stone reflect the Gothic style even though they were created in the various closed churches. Father Brandt said his parishioners were “excited to be recycling so many things.”

On the other hand all of Blessed Teresa’s red oak pews with kneelers are new because of a consideration for modern ergonomics and comfort. New lighting fixtures offer brighter, more energy efficient light.

A team of carpenters have been creating new wooden pieces or adapting older pieces for reuse all summer long at the church, along with many other contractors.

It all came together Oct. 27 for the Mass with Archbishop Chaput, which featured a 30-voice choir and 17 instrumental accompanists, all parishioners, and all led by the parish music minister, John Seitz. “Mother Teresa sent him to us,” Father Brandt said.

The parish’s namesake also has a prominent presence at the parish. A bronze statue titled “Teresa of Calcutta, Mother of the Poor” will be placed in the daily Mass chapel. When completed by renowned ecclesiastical artist Tony Visco, the statue’s two hands will reach out to visitors.

“I want her focus to be on the person kneeling in front of her, she will be reaching out to them,” Father Brandt said.

The $7.9 million cost of the new church is financed through a 30-year mortgage which will rely on the continued support of parishioners, the pastor said, who added that they were involved in every stage of planning and design modifications.

“Some people said it would never happen, but it got done,” he said. “They got to watch this being built from the ground up. There’s great excitement, and it’s about God’s house.” 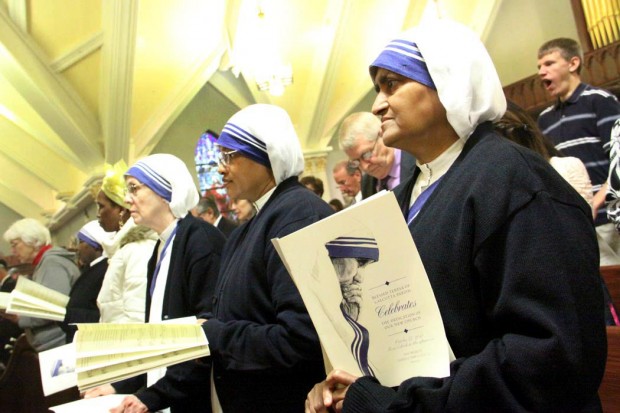