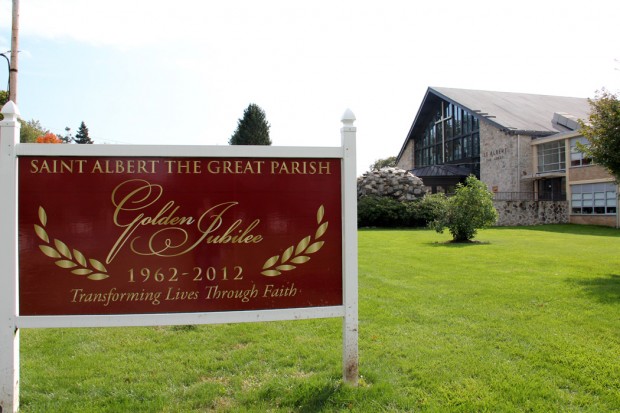 June 6, D-Day, is certainly auspicious in American history. It’s auspicious too in the Archdiocese of Philadelphia because that’s the date 50 years ago St. Albert the Great Parish was erected.

One of the larger parishes in the Archdiocese, its campus is in Huntingdon Valley, Montgomery County, but many parishioners live in adjacent Northeast Philadelphia.

Father Raymond McCullough was appointed the founding pastor, and although he soon had a 25-acre property on Welsh Road, as is usually the case with a new parish, there was no immediate church.

Sunday Masses were celebrated at the Marine Corps League auditorium on Red Lion Road for the first two years of the parish’s existence, while plans were underway for the construction of the school, church and convent for the Sisters of Notre Dame who would staff the school.

At first Father McCullough lived at Our Lady of Good Counsel Rectory, Southampton, until an old farmhouse on the church property could be renovated for at least a temporary rectory.

Within just over two years the school was up and running, and the following year the church itself, with a remarkably large 1,260 seating capacity, was dedicated by Cardinal John Krol.

None of this could have been accomplished without the time, talent and treasure of dedicated parishioners, and perhaps none did more than Ed Shea, who became a sort of right hand man to Father McCullough from the very beginning.

It was he who would tend to heating problems at the Marine Corps League, prepare the parish spiritual and financial reports, push Father McCullough’s car out of the mud, introduce the sisters to the automobile the parish obtained for them and even try to explain its operation, although they just wanted to sing as he drove along.

Ed’s wife Marion wasn’t Catholic, but no matter, she acted as a parish secretary and even counted the children’s collection.

Father McCullough died with his boots on, still pastor in 1976. He was succeeded briefly by Father Edmund Weslowski for the next decade, and Msgr. Paul F. Curran, who arrived in 1987, served until 2006, when he was named pastor emeritus. He was succeeded by Msgr. Paul V. Dougherty, the current pastor.

Kay Frank, an active parishioner who arrived in the parish with her husband Jim in 1980, has seen many upgrades, especially under Msgr. Curran whom she describes as “a nice man and a good administrator.”

During his tenure a computer lab, science lab, gymnasium and religious education office were added. A new baptistery, gathering space and church entrance were added, and the original sanctuary was partitioned off as a daily Mass chapel and an adoration chapel.

The new altar, pulpit and lectern compliment the striking original wooden ceiling. Striking stained glass was added, as well as Stations of the Cross designed by parishioner and artist Tina Mazuros. Much of the work was funded through a capital campaign and the sale of excess parish land.

As for the present pastor, Msgr. Dougherty, Kay Frank describes him as a priest “everybody loves. You can’t say anything but good about the man.”

The parish, which Archbishop Chaput visited to celebrate the 50th anniversary Mass on Sunday, Oct. 14, is well poised for the next half century.

With about 2,100 households with 7,000 parishioners, St. Albert’s can count its blessings.
“Our school has 431 children and is very good; it is a big asset to the parish,” Father Dougherty said. “Along with the CCD Program which has 300 children and a nice athletic program, we are really good at youth programs,” Father Dougherty said. “We also have an excellent Pre-Cana Program.”

What is especially crucial, he added, is “the good sense of volunteerism and the excellent lay involvement.” 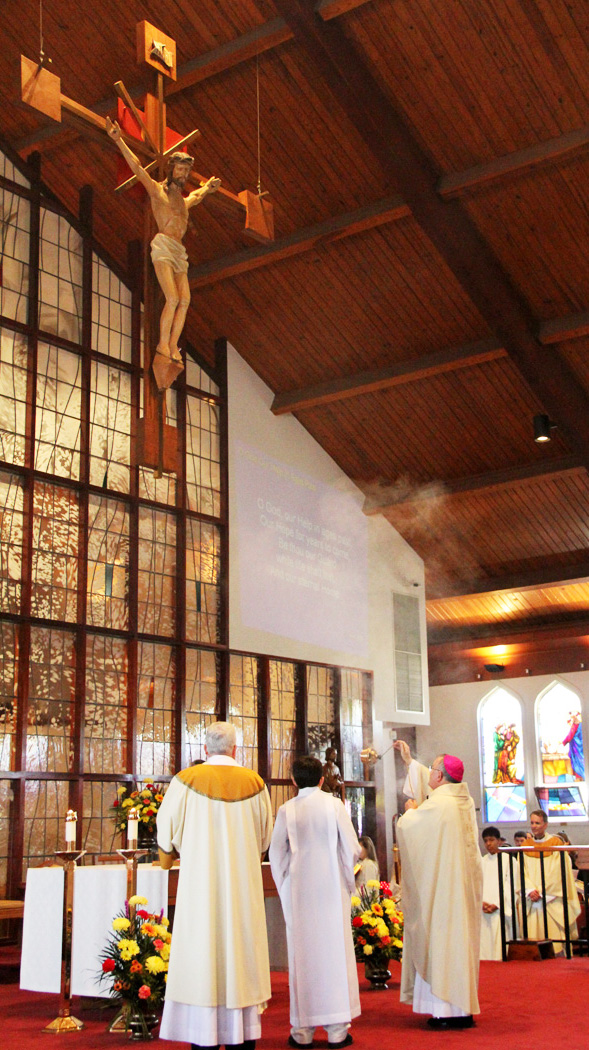 Archbishop Chaput incenses the altar during the Mass he celebrated for the 50th anniversary of St. Albert the Great Parish in Huntingdon Valley Oct. 14. (Sarah Webb)

PREVIOUS: Priest cleared to return to ministry, despite violation of ‘Boundaries’ code

NEXT: Archdiocesan Review Board gets new leaders, members