Priest cleared to return to ministry, despite violation of ‘Boundaries’ code 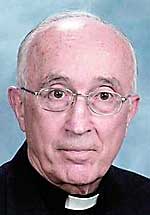 Father Joseph DiGregorio, a former Army priest chaplain who served in Iraq but since last year was one of 26 priests suspended following a 2011 grand jury report on child sexual abuse, has been found suitable to return to priestly ministry by Archbishop Charles Chaput, the Archdiocese of Philadelphia announced Oct. 15.

The archbishop approved the recommendation for Father DiGregorio based on the work of the Archdiocesan Review Board and the Multi-Disciplinary Team (MDT) of more than 20 investigators with experience in child abuse issues.

But the team found that the priest had violated the Standards of Ministerial Behavior and Boundaries in an incident more than 40 years ago. In itself, such a violation of the Archdiocese’s code of conduct would preclude a return to ministry, but the archdiocesan statement cited “compelling evidence that makes him suitable for ministry.”

The statement did not reveal the nature of the evidence, nor did it provide details of the incident. The reason, the statement said, was “to protect the individuals involved in this matter.”

The MDT report indicated no complaints had been filed about Father DiGregorio “in more than 40 years, there is no evidence that he poses a danger to children and there is no indication he had or would engage in a pattern of behavior that would necessitate his removal from ministry,” the statement said.

Father DiGregorio was ordained in 1966 and served most of his priesthood outside the Philadelphia Archdiocese as an Army chaplain, from 1988 to 2005. He ministered to the soldiers of the 101st Airborne Division and served in Operation Desert Shield and Operation Desert Storm in Iraq.

The Archdiocese described the procedure for Father DiGregorio’s case as following the resolution this year of 14 other cases of priests placed on administrative leave following the February 2011 report of a Philadelphia grand jury investigating child sexual abuse by clergy of the archdiocese.

As with the others, Father DiGregorio’s case was submitted first to the local district attorney’s office, which the archdiocese did not name. After the case was investigated and released by the district attorney, an investigation was conducted by theMDT. The results of the investigations were provided to the Archdiocesan Review Board, a panel that advises the archbishop throughout the process of addressing allegations of sexual abuse of minors and violations of the Standards of Ministerial Behavior and Boundaries, evaluating clerics’ suitability for ministry and the continual review of Archdiocesan policies and procedures.

Archbishop Chaput said that in making his decision, “I relied on the counsel of the Archdiocesan Review Board and the Multi-Disciplinary Team. The experience of these experts who have devoted their lives to addressing the societal evil of sexual abuse is critical to the work we do. All cases are unique and contain various factors that require careful consideration. This one was no exception.

“Based on the facts of Father DiGregorio’s case, a thorough external investigation, the fact that no other complaints were reported in an atmosphere where the public was largely aware of the situation, and that thorough clinical evaluations from competent outside authorities indicate he poses no danger to minors, I found him suitable for ministry.”

Parishioners at St. Martin’s and Stella Maris were informed of Archbishop Chaput’s decision at Masses last weekend. No information was available as to where or when Father DiGregorio would return to ministry.

In other cases, the Archdiocese has received release from the district attorney, the internal investigation is complete, and the matter is awaiting examination by the Archdiocesan Review Board or a final decision by Archbishop Chaput.

The archdiocese cited the complexity of the process as the reason it could not offer a timeframe for resolving the cases, but said it is “anxious to announce them as soon as possible.”