Catholics in Archdiocese reach out, give much to victims of Superstorm Sandy 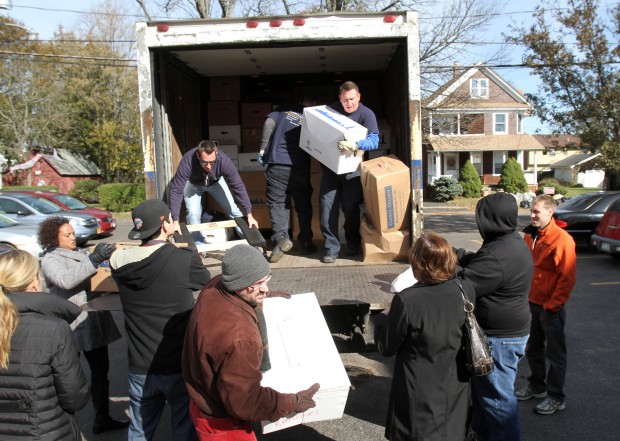 A truck filled with donated goods for people affected by Hurricane Sandy is unloaded at Our Lady of Perpetual Help Church in Lindenhurst, N.Y., Nov. 6. Lindenhurst was one of the hardest-hit areas of Long Island when the super storm swept through the Northeast in late October. Tens of thousands of Long Island residents still had no power as of Nov. 14. (CNS photo/Gregory A. Shemitz)

Hurricane Sandy, which struck the East Coast during the last week of October, may have been mostly hype in Philadelphia but it was absolutely devastating elsewhere.

Especially hard-hit were neighbors in New Jersey and New York, and also a serious matter in places like Bucks County that experienced extended power outages.

Here in the Archdiocese of Philadelphia there has been an outpouring of sympathy, and more to the point, aid for those who were most affected. Archbishop Charles Chaput has asked all 257 parishes to conduct special collections for relief efforts on the weekend after Thanksgiving, Nov. 24-25.

Catholic Social Services of the Philadelphia Archdiocese dispatched a team of staff members to North Jersey to assist in the monumental task of bringing things back to normal.

“We are here for a week,” said Renee Hudson-Small, the administrator of Northeast Family Service Center, who was sent to the Diocese of Metuchen in north-central New Jersey, an area hard-hit by flooding. “We are trying to organize recovery efforts, making sure resources are in place, doing needs assessments and taking care of gaps in services.”

Part of the problem, according to Hudson-Small, is that affected communities cover a wide area not necessarily close to one another. Hardest hit are communities located near lakes and streams.

“There are bad pockets and that makes it more challenging,” she said. “It is coming somewhat back to normal with people who had to evacuate the area finally getting to see their homes.”

Hudson-Small is no stranger to relief work. She was dispatched to Biloxi, Miss., for three weeks after Hurricane Katrina. “That was worse,” she said. 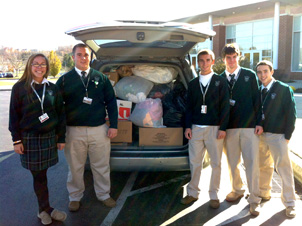 In Bucks County most of the damage was done by prolonged power outages, mostly caused by downed trees. Most calls for assistance were from people who had no food due to spoilage caused by the power outages, according to Gail McCoach, administrator of the CSS Bucks County Service Centers. Mary’s Cupboard, which is at the Levittown Service Center, “has gone above and beyond in supplying food,” she said.

They have also been supplying people who have urgent needs with supermarket gift certificates. The service center itself lost three days because of the power outage.

The CSS family service centers in Bucks, Montgomery and Philadelphia Counties are drop-off sites for donations collected through the United Way and television station NBC 10, according to Amy Stoner of CSS.

The agency is also informing pastors in the affected parishes about available assistance and applying for a $10,000 grant from Catholic Charities USA to support efforts in Bucks County.

In parishes across the Archdiocese the immediate responses to the needs are almost too numerous to mention.

St. John the Baptist in Ottsville, Bucks County, is one of the oldest parishes in the Archdiocese and its tiny school (91 kids) has a huge heart. Principal Michael Patterson heard from his daughter, St. Joseph Sister Meghan Patterson at St. Martin de Porres School in Philadelphia that a school staffed by St. Joseph Sisters, St. Rose Catholic School in Belmar, N.J. near Asbury Park, had deep troubles.

How deep? There was nine feet of water in the main hall, and after that was pumped out there were 800 pounds of dead fish to deal with, not to mention a few lively sea turtles.

The kids at St. John the Baptist got to work soliciting donations, and student council members spoke at parish Masses Nov. 17-18. Patterson, who hates dress-down days, is even going to reward the kids with a dress down day.

Thanks to portable classrooms St. Rose School did reopen on Nov. 15.

St. Elizabeth Parish in Upper Uwchlan, Chester County, went all out to help the folks on Staten Island, one of the hardest-hit areas.

John Case, a parishioner who spent two days volunteering in the area and has relatives there, explained the needs were immediate and supplies were most needed, not money, because the items people needed were simply not available in the area.

“Staten Island is a mess and they need help,” Case wrote in an e-mail message. “I don’t know about many of you, but I have always found that direct action is the best way to help people directly, without getting caught up in red tape.”

The call went out for hats, gloves, socks, shoes, waterproof boots, rain slickers, push brooms, shovels, wheelbarrows — you name it. The result was a huge outpouring of donated items.

A box truck provided by O’Donnell was fully loaded and she personally drove it to Sea Gate near Coney Island, where she was met by a police escort and everything was distributed to the very needy hurricane victims.

“It’s hard to describe in words what we saw as soon as we arrived,” O’Donnell wrote in an e-mail message. “As we unloaded everything from our parish to a one-room church, we could not help but stare at the destruction of the houses across the street that were completely demolished and the piles of mud and debris stacked 20 feet high of families’ personal belongings.”

After two weeks the community still did not have power or working sewers, she said, and it was heartbreaking to see mothers with babies and the elderly stand in line for a cup of coffee and the few supplies available.

“Those who were able helped us unpack the truck, telling us over and over again to share a thank you with everyone in our parish,” O’Donnell said. “I wanted to say, ‘No, thank you for allowing us to share with you.”’

Also in Chester County, students and parents at Bishop Shanahan High School in Downingtown, along with parishioners of SS. Peter and Paul in West Chester, donated 2,500 coats and other necessary items to affected communities in Ocean City, N.J. and Staten Island, N.Y.

At St. Leo Parish in Philadelphia, the people didn’t wait for a directive to open their wallets.
Nov. 3-4 was the first weekend after the hurricane, and because there were already two scheduled collections and no advance notice, Father Joseph Farrell simply stood at the back of the church with a basket after Mass. He got more than a thousand dollars.

But then there are so many stories about good people willing to help.

NEXT: Catholic Life Congress helps 700 people share their faith with others