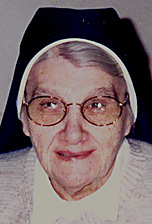 Sister Mary Henry O’Connell, S.H.C.J., who was a Sister of the Holy Child Jesus for 79 years, died of heart failure at Holy Child Center in Rosemont Nov. 16. She was 102.

Born in Morton, Delaware County, Sister Mary Henry graduated from the former St. Leonard’s Academy in Philadelphia in 1930 then entered the Convent of the Sisters of the Holy Child Jesus. She professed her first vows in 1933 and her final vows in 1938. She was well known to many by her former religious name, Mother Mary Henry.

From 1993-2007, Sister Mary Henry performed community service while living in Sharon Hill. This involved everything from keeping in touch with and continuing to serve as a mentor to many former students, attending alumnae events, and collecting the tabs from soda cans to donate to the Ronald McDonald House. She continued to do community service after moving to New Sharon in Rosemont in 2007.

Sister Mary Henry held a bachelor’s degree in history and a master’s degree in education. Both degrees were earned at Villanova University, the first in 1944 and the second in 1946.

She is survived her religious community, several cousins, nieces, nephews, as well as several grand and great grand nieces and nephews.

In lieu of flowers, memorial donations may be sent to the SHCJ Retirement Fund, 1341 Montgomery Avenue, Rosemont, PA 19010.

NEXT: Deacon Eichman, of St. Kevin Parish, laid to rest