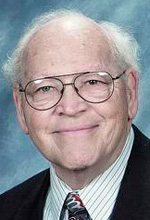 Born in Philadelphia the son of the late Edward A. and Frances (Liebert) Eichman, he was a graduate of St. Joseph’s Preparatory School, Villanova University and Villanova School of Law. He was a veteran of the Korean War and practiced law until his retirement from Edward A. Eichman Associates PC in 2001.

A resident of Springfield for over three decades, he was ordained to the diaconate in 1997, and served at St. Kevin until his 2010 retirement.

He was especially devoted to the Legion of Mary of which he was chaplain in the parish.

“It was a spiritual part of his own life,” said St. Kevin’s pastor, Father John C. Moloney. “He loved to be before the Blessed Sacrament, and it didn’t stop with his own life. He shared his faith with others.”

Deacon Leonard J. Diana, who also serves at St. Kevin, was deacon of the Eucharist and Deacon Arthur McGuire was Deacon of the Word.