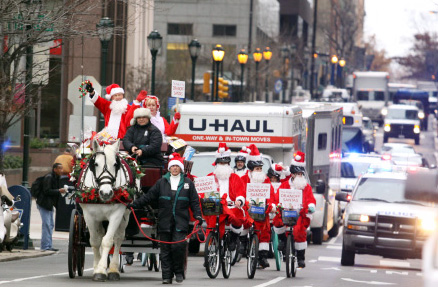 Carl Dranoff (aka Santa Claus for a day) makes his way atop a carriage filled with presents through Philadelphia toward the Archdiocesan Pastoral Center Dec. 21. (Photos by Sarah Webb) 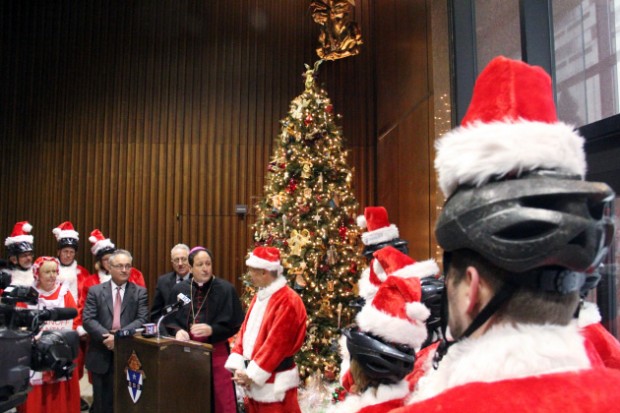 In this case, the Santa suit was donned by real estate developer Carl Dranoff, as he led a horse-drawn carriage loaded with more than 100 gifts through center city.

He was joined by 15 Santa’s helpers from Dranoff Properties on bicycles – picture men and women , the tall and the small, in Santa suits, white beards and, considering safety, bicycle helmets beneath tassled red hats.

The cheerful spectacle wound along center city’s streets on a blustery cool Friday morning to the headquarters of the Archdiocese of Philadelphia to bring presents to about 85 foster children who visit Casa del Carmen. The family services agency in North Philadelphia is operated by archdiocesan Catholic Social Services (CSS).

Auxiliary Bishop John J. McIntyre and CSS officials welcomed Dranoff and his team to the building in front of its 20-foot-tall gleaming Christmas tree.

“I’m just delighted we could bring cheer and happiness,” Dranoff said, adding that through the Santas on bicycles, he wished “to promote bike riding in the city.”

Last September his company launched a bike-sharing program for residents of his properties.

He also presented a $1,000 check to Bishop McIntyre for Catholic Social Services.

The bishop said he was grateful for Dranoff’s generosity and all those who donated the gifts.

The gesture “fulfills the mission of Christ especially at this time of year to care for those who are in need,” Bishop McIntyre said. “Thank you for your generosity and care for the children at Casa del Carmen.” 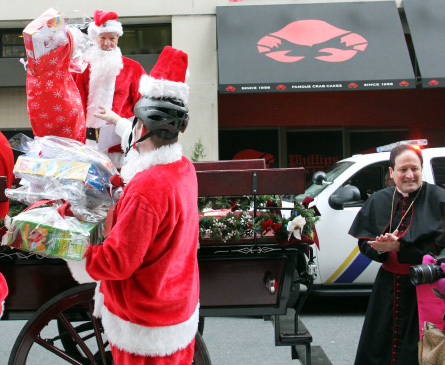