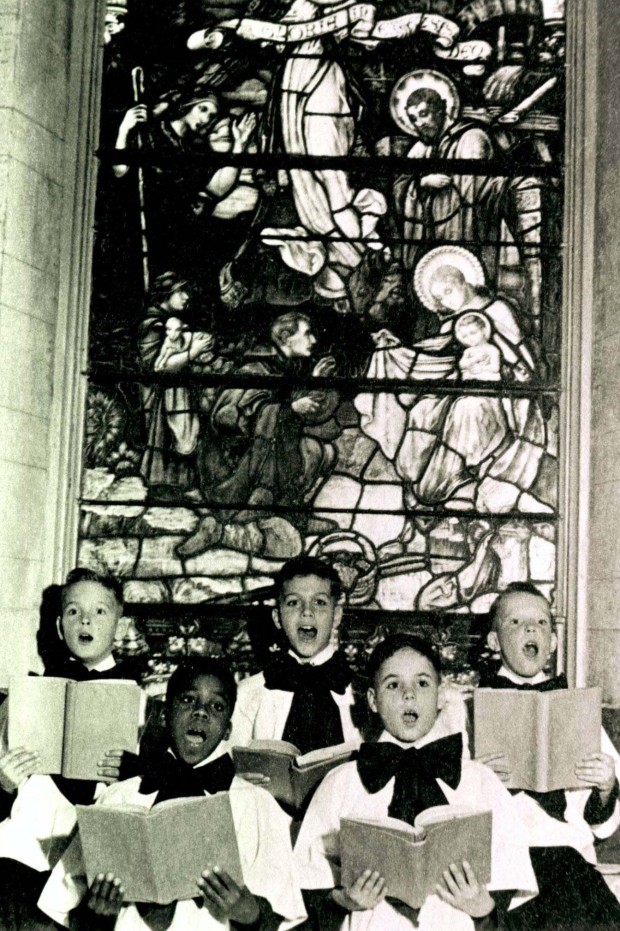 A choir at the former St. John's Orphan Asylum in West Philadelphia sings a Christmas carol during the 1950s, including Ron Clancy at back row far left. He would consequently develop a love for traditional carols, which led him to write four books on the subject. 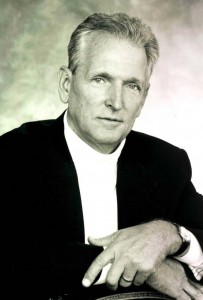 Ron Clancy loves Christmas and most of all Christmas music, especially the fine old carols that have been passed down from generation to generation.

You could call him a modern day Scrooge, who after seeing the light, “holds Christmas in his heart and tries to keep it all the year.” Except in this case, Ron was not an old man when he received his epiphany.

As he’s told his story many, many times, he was a little guy of 6 years old, one of the new kids at the old St. John’s Orphan Asylum in West Philadelphia. It was Christmas Eve, and he was roused from sleep and taken to the beautifully decorated chapel for his first Midnight Mass.

What enthralled him the most were the sacred carols so sweetly sung by the Sisters of St. Joseph who were his caretakers. Sixty-two years later that memory is still as fresh as yesterday in his mind.

In the late 1970s he began attending as many Christmas concerts as he could, and to collect the best Christmas music he could find. To discover the origins he spent hundreds of hours poring over music collections in libraries around the country.

At first he gave CDs and explanatory notes from his collection to his friends, some of them as Christmas presents. It was at his friends’ suggestion he set out to compile the ultimate collection of good Christmas music, and also obtaining the necessary copyrights in order to sell it.

At this point, through his company, Christmas Classics Ltd., he has not one but four collections available for purchase.

If anything, Ron’s personal journey is more inspirational than the music he loves.

He was only six months old when he and his older brother Vincent and sister, Eleanor (Bunny) were placed in St. Vincent’s Orphanage in Lansdowne, where Monsignor Bonner/Archbishop Prendergast High School is now located. It was run by the Daughters of Charity, and “I have very good and fond memories of St. Vincent’s,” he said.

But St. Vincent’s only kept very little boys, and so at 6 he was passed on to St. John’s. When he was 7 his mother took her children back home and he lived with her for two and a half years, but his home life was so chaotic, first his brother, Vincent ran away and a few weeks later Ron did too.

The judge in Family Court asked him where he wanted to go, and he told him, “I want to go back to St. John’s where my friends are.”

Today it is social service gospel that orphanages are the very worst places for children. Ron and many other institutionalized children of his generation know better.

“I still maintain relationships with the Sisters at St. Joseph’s Convent as well as Chestnut Hill College,” Ron said. “Two sisters proofread two of my manuscripts. I guess to a degree I look upon the sisters as mother figures. My sense about them is more of a great admiration and deep sense of gratitude.” 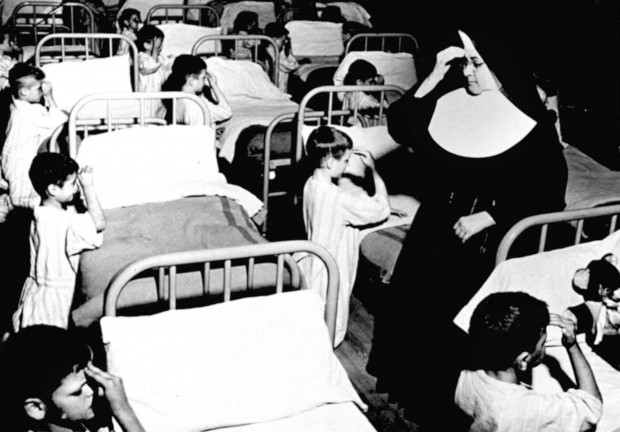 “Sister Lucia was known throughout the orphanage as the friendly one, an easy mark to speak, and the boys were happy to be in her grades,” he recalls. “I had Sister Clare Genevieve for three years and I had great respect for her. She carried herself with dignity, was an authority figure yet didn’t act the part. I hope to see her in the after-life.

“Sister Eileen Dolores was very light-hearted, comical and creative in the classroom. She was one of my favorites. Sister Mary David was the ‘looker’ and she loved boxing.”

All of the sisters had qualities to be remembered; some were stern, others not. He has affection for all of them.

Thanksgiving through Christmas was a very special time at the orphanage. The Knights of Columbus would serve Thanksgiving dinner. Students from Villanova College would take the boys into town to see the wonders of John Wanamaker’s, Lit Brothers, Gimbel’s, or Strawbridge and Clothier; buy them a gift and treat them to dinner at the Horn & Hardart’s Automat. And of course, there were always holiday carols.

Children who had reasonably stable relatives would go home for Christmas, Easter and a short summer vacation; those who did not would go the homes of kind volunteer families. Ron and Vince spent holidays first with the McLaughlin family and later with the Macatee family.

“My memories of spending Christmas, Easter holidays and summer vacations with the Macatees are especially nostalgic and I have had a close relationship with that family ever since,” he said.

At times, if the sisters thought a boy especially promising, they would keep him at St. John’s and also send him to St. Thomas More High School. Several of these young men went on to become priests for the Archdiocese of Philadelphia.

Both Vincent and Ron were retained by the sisters, but after Vincent graduated from St. Tommy More, Ron, who had completed one year there, asked to be transferred to St. Joseph’s House, because that’s where most of his buddies went. The Sisters reluctantly transferred him.

He was happy there too. Writing for a St. Joseph’s centennial book in 1988, he recalled, “We were always up to something, pulling off pranks, agitating the authorities, but always in the spirit of good clean fun. Things never got out of control though, because discipline and respect were guiding principles.”

Addressing the common misconceptions about orphanage upbringing, he wrote, “Was I unfortunate …? Not hardly! Not when I review the ravages of our drug-infested society, particularly among inner-city youths, and the scourge it has placed upon us as a nation. Not when we witness the utter deprivement of little children whose psyches are wrecked by the proliferation of divorce, or broken homes, or child abuse from emotionally troubled parents, or in some cases to be brutally mutilated or even killed. Add to this the unsettling trauma of abortion and it becomes a pretty sordid state of affairs we find in our midst.”

At St. Joseph’s Ron was a good athlete, and he received a major break when with the help of his coach, Joe Paluck, he obtained a basketball scholarship to George Washington University in Washington, D.C. Although he ultimately dropped out of the basketball program, he continued with his college course load, financed by a full-time position he obtained as an elevator operator on Capitol Hill. 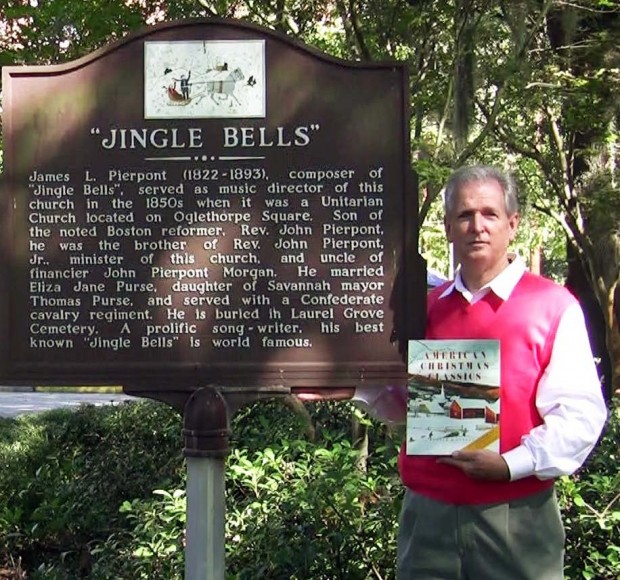 Now a technology recruiter and author, Clancy stands with one of his books next to a plaque near a church in Savannah, Ga.

He went on to a career as a corporate recruiter in the technology field. Married, he and his wife Renate live in the Cape May, N.J. area.

His expertise in the field of Christmas music has gained him national recognition, and he has been featured in a multitude of newspapers, magazines and radio and TV shows. So far his company, Christmas Classics Ltd., has produced four comprehensive sets, noteworthy not only for the music but for the lavish artwork and commentary that go with it.

While they have all been critically acclaimed, Ron will probably never get rich from them.

“I still have not recovered from the amount time, effort and financial resources that have gone into my ‘exotic’ dream,” he said. “The satisfaction is from the gratitude expressed by my customers, media folks and even musicologists. It vindicates my vision to raise Christmas music above the mundane.”

(Clancy’s collections of Christmas music may be ordered through ChristmasClassics.com, or through Amazon.com in partnership with CatholicPhilly.com’s Marketplace — see Featured Books on our Marketplace.)

Lou Baldwin is a freelance writer and a member of St. Leo Parish in Philadelphia.