Pa. won’t set up health insurance exchanges, might opt out of abortion in federal plan 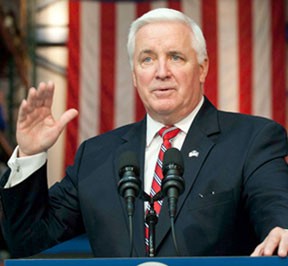 UPDATED Dec. 21, 2012 — Pennsylvania Governor Tom Corbett announced Dec. 12 that the state would not set up its own health insurance exchanges and instead join the federal exchange, which will cover elective abortions.

Just how the decision will impact such issues as abortion is not totally clear.

At the Pennsylvania Pro-Life Federation, legislative director Maria Vitale Gallagher thinks states can opt out of abortion coverage in the federal exchange.

Douglas Johnson, legislative director for National Right to Life in Washington, D.C., said that although the Patient Protection and Affordable Care Act (PPACA, the federal health care reform law) will cover abortions, individual states can pass a law to opt out of abortion coverage if the state has decided not to set up its own insurance exchange program.

Under the wording of the law it doesn’t matter whether the state or the federal government runs the exchange program. At least 15 states have already done this, he said, adding “it has to be a well-drafted opt-out law.”

Unless the state legislatures do this, abortion will be covered under the law.

In Pennsylvania, the Pennsylvania Catholic Conference, after consultation with its attorneys, believes the opt-out is possible. The PCC is urging the legislature to draft legislation for it, but nothing can happen until the legislature reconvenes in January.

The PCC has placed a petition on its website asking people to contact their legislators to enact an opt-out law, according to Amy B. Hill, communications director for the PCC. (See the latest PCC statement on this issue. The PCC encourages Catholics to get involved with issues of interest to the Church in Pennsylvania by joining the Catholic Advocacy Network. Learn more about advocacy alerts here.)

The federal exchange enables qualified Pennsylvania residents to purchase a health care plan, if not already covered by an employer’s plan, that they will be required to carry under the PPACA by 2014.

A state exchange would have given Pennsylvania the ability to opt out of abortion coverage. The Pennsylvania Catholic Conference, the public policy arm of the state’s Catholic bishops, said in a statement Dec. 12 that it will work with other pro-life groups to “explore every option to avoid the federal elective abortion provision.”

“The Catholic Church has long and consistently advocated for the reform of the American health care system,” the statement said. “Access to health care is fundamental and necessary for human dignity. Yet concerns raised during the health care reform debate about conscience protection and coverage of elective abortion are not resolved.”

The health care reform law requires one plan on the exchange that will not cover abortions, beyond endangerment to the life of the mother or in case of rape and incest. All of the other plans may include coverage of elective abortions, and the federal tax credit subsidies will help pay for those plans.

A lengthy Q-and-A on the website of the Pennsylvania Catholic Conference — www.pacatholic.org/questions-answers-about-health-care-reform points out that not every plan “will be identical,” so the plan that does not cover abortion might not meet a family’s needs “for other reasons.” If an individual or family purchases those plans that cover abortion, they cannot choose to exclude that coverage.

The conference says that to opt out of abortion coverage by plans in the exchange, a state has to pass a law to do so.

The Affordable Care Act was passed without the Hyde amendment, the long-standing federal statutory restriction that that says federal funds cannot be used abortion services, except in cases of rape or incest, or when the life of the woman would be endangered.

An effort to insert abortion funding restrictions in the House version of the health care reform failed. Before the Senate passed the bill that was eventually signed into law by President Barack Obama March 23, 2010, the U.S. Catholic bishops repeatedly urged U.S. senators to put Hyde amendment language in the measure.

On March 24, 2010, Obama signed an executive order saying that the current Hyde amendment restrictions would extend “to the newly created health insurance exchanges.” But the chairman of the U.S. bishops’ the head of the U.S. bishops’ Committee on Pro-Life Activities said that order “does not address, or claim to address, several of the problems.”

The Pennsylvania Catholic Conference site says “an executive order cannot change provisions of the new law or run afoul of the interpretation that courts will give to the new law.”

Gov. Corbett explained in a statement that he had to make a decision this week on whether to set up a state exchange just ahead of a federally mandated deadline on Dec. 14. For two years, he said, his administration had been planning for implementation of the health care law that passed in spring of 2010.

Although the administration had sought information from the federal Department of Health and Human Services (HHS) to “help determine costs, impacts and flexibility in order to inform our decisions,” he received “little acknowledgement.”

“Even HHS Secretary (Kathleen) Sebelius recently admitted on a call with governors that the regulations released a few weeks ago were not final and that more drafts are to be expected,” Corbett said.

“Therefore, I have decided not to pursue a state-based health insurance exchange at this time. It would be irresponsible to put Pennsylvanians on the hook for an unknown amount of money to operate a system under rules that have not been fully written.”

In a Dec. 12 letter to Sebelius, Corbett called state authority to run health insurance exchanges “illusory,”and that he believed Pennsylvania “would end up shouldering all of the costs by 2015, but have no authority to govern the program.”

He expressed concerns over “the costs of Medicaid expansion in Pennsylvania, which could reach more than $4 billion in state-only costs over the next eight years. This could mean substantial tax increases to Pennsylvania families.”

He pledged to work with HHS to obtain details on “costs, impacts and flexibility involved in the different options for Medicaid expansion,” and to “provide greater access to high quality and more affordable health care coverage for Pennsylvanians.”

Pennsylvania is now one of 25 states to join the federal exchange and not set up their own state-based exchanges, according to the Kaiser Family Foundation.
In the region, Maryland and New York will utilize state exchanges; New Jersey, Ohio and Pennsylvania will not and Delaware will have a state-federal partnership.

States will be able to reconsider their choice of exchanges each year.

NEXT: Catholics walk, pray, celebrate love for Our Lady of Guadalupe on her feast