Catholics walk, pray, celebrate love for Our Lady of Guadalupe on her feast 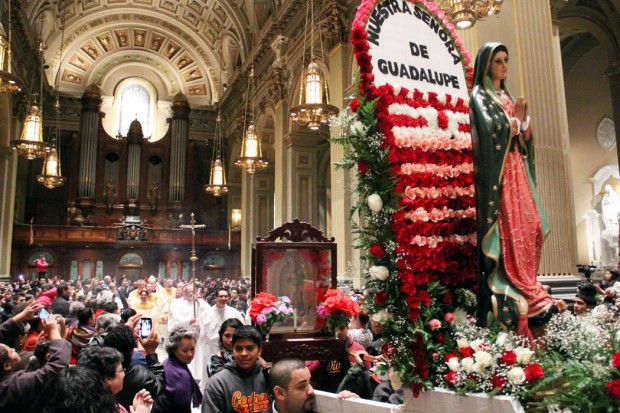 Worshipers fill the Cathedral Basilica of SS. Peter and Paul, Philadelphia, for the vigil celebration of the feast of Our Lady of Guadalupe Dec. 11. (Photo by Sarah Webb)

Spanish-speaking Catholics poured out their love for Our Lady of Guadalupe throughout the Archdiocese of Philadelphia this week.

For the Tuesday, Dec. 11 vigil preceding our Lady’s feast on Dec. 12, hundreds of Latino pilgrims from Philadelphia parishes began to walk in a procession as early as 4 p.m. from their homes to the Cathedral Basilica of SS. Peter and Paul in center city for a Mass and celebration.

From North Philadelphia, worshipers started south from St. Joan of Arc Parish in Frankford down to Visitation B.V.M. in Kensington, then to St. Peter the Apostle and St. Michael’s, and on to center city, where they were joined by pilgrims from La Milagrosa, the Spanish chapel attached to the Cathedral Parish.

(See a photo gallery with many images of the feast plus a feature-length video and six video segments on our YouTube channel.)

From South Philadelphia, the faithful from St. Thomas Aquinas and Annunciation B.V.M. parishes began their trek north to the cathedral, only after praying the rosary together at St. Thomas.

By 8 p.m. all the pilgrims met at the cathedral having carried candles and following statues and images of Our Lady of Guadalupe. Once inside the cathedral they continued the procession, presented roses to Mary’s image and celebrated Las Mañanitas, a traditional hour-long singing of Marian songs by all, led by the Mariachi Flores band of musicians.

The images, including the permanent shrine to Our Lady of Guadalupe in the Cathedral, were festooned with flowers and banners reflecting the colors of the Mexican flag, even as many worshipers wore the colors or traditional Mexican garb. 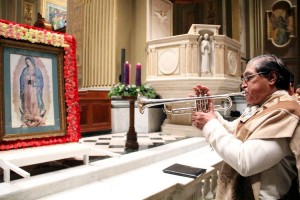 Las Mañanitas, part of the celebration of the feast, includes a mariachi band leading songs of devotion to Mary, under the title of Our Lady of Guadalupe. (Photo by Sarah Webb)

Mary, under the title of Our Lady of Guadalupe, appeared to now St. Juan Diego, a simple Mexican peasant to who she revealed her image in a cloak, or tilma, in 1531. The apparition and Mary’s messages to St. Juan inspired the growth of the Christian faith in Mexico, South America and througout the workld.

She was declared patroness of the Americas by Pope John Paul II in 1999.

Auxiliary Bishop John J. McIntyre was the main celebrant and homilist for the Mass that followed at 9 p.m. at the cathedral, which was filled to its 1,500 capacity, according to the archdiocessan Office for Hispanic Catholics.

(See Bishop McIntyre’s homily in Spanish and in English.)

The office’s director, Joann Roa, has celebrated the feast before in her previous home in Kansas City, Mo., but her experience of it in Philadelphia was extraordinary.

“It was really moving. Seeing the women and men carrying the heavy images … I have never seen anything like it.”

Participants for the feast make sacrifices as they prepare the statues and images on platforms and decorate them, then start their procession in the afternoon and celebrate the feast on Dec. 12.

“They’re giving up two days of work, usually unpaid, just to make it happen,” Roa said. “It’s a demonstration of faith and love for our Lady. I was able to be with the people who were decorating the chapel. Each flower had to be placed on the shrine and the main image in the cathedral. It was very moving to me.”

And celebrations of the feast were not confined to Philadelphia. Roa estimates 400 Spanish-speaking Catholics celebrated Mass and Las Mañanitas at St. Isidore Church in Quakertown on Tuesday, while Wednesday saw 500 to 600 gathered at St. Patrick Church in Norristown and hundreds more at St. Agnes, West Chester.

She estimates about 350,000 Hispanic Catholics live in the five-county Philadelphia Archdiocese.

The expressions of love for Mary are “really beautiful,” Roa said. “We all need to have that faith,” because as patroness of the Americas, “she is for everyone.”

PREVIOUS: Pa. won’t set up health insurance exchanges, might opt out of abortion in federal plan

NEXT: Mothers and daughters share tea, learn about fertility