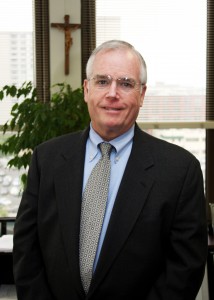 As secretary for Catholic education, McCarron oversaw the central administration for the 17 archdiocesan high schools and four schools for special education, the centralized functions for parochial schools including curriculum and other educational services, catechetical formation including parish religious education programs, youth and young adult programs and the Newman Apostolate that serves colleges and universities in the archdiocese.

After serving as superintendent of schools before being named education secretary in 2001, the 68-year-old McCarron will conclude 25 years in leadership with the archdiocese when his resignation becomes effective Feb. 1, 2013.

“It is time for me to step down so that new leadership can guide and direct the mission of Catholic education,” McCarron said in a statement. “While it is difficult to step back from this role and from those whose dedication, commitment and passion for Catholic education have helped to mold thousands of students in the Catholic faith, I feel blessed for the opportunity to have worked with such devoted people.”

In his statement McCarron expressed hope that the Faith in the Future Foundation, which assumed operational control of the high schools and special-education schools last August, would  “establish a new educational vision” with the Office of Catholic Education “that will enable our schools to grow and flourish in the years ahead.”

The broad umbrella structure of the secretariat that McCarron led was instituted under Cardinal Anthony Bevilacqua, to whom McCarron reported directly as secretary. Under Cardinal Justin Rigali’s administration, McCarron continued in his role but starting in 2004 he reported to Auxiliary Bishop Michael J. Fitzgerald, who today oversees Catholic education in the Archdiocese under the leadership of Archbishop Charles J. Chaput.

“Dr. McCarron has had a profound influence on Catholic education in the Archdiocese of Philadelphia for more than a quarter of a century and his leadership has been defined by an abiding commitment to our students, families, administrators and teachers,” Bishop Fitzgerald said in a statement.

He praised how McCarron helped students “not only pursue their dreams but embrace the power of faith in their lives. His life has been devoted to the cause of teaching our young people and for that, we are deeply grateful.  We wish him and his family nothing but the best in his well-deserved retirement.”

The statement by the Archdiocese said McCarron will remain in his position while the Archdiocese, Faith in the Future Foundation and a committee of experts and leaders conduct a national search for his successor.

“All of us at Faith in the Future are deeply grateful for the work Richard has done,” the foundation’s chief executive officer, Samuel Casey Carter, said in a statement. “Today, as we aim to grow the enrollment of our schools and make quality Catholic education affordable to any family that wants it, it places a real responsibility on us to find the right leader to succeed Dr. McCarron.

“The Catholic schools of this Archdiocese are among the very best in the region and I am confident that we will attract top-level talent quickly to join us in this effort. Richard has very generously agreed to stay on in a consulting role even after his successor is found, so we are assured of a smooth transition going forward.”

Until he was named superintendent of schools for the archdiocese in 1990, McCarron worked in the Catholic education office as curriculum director for secondary schools, prior to which he taught on the high school and university levels.