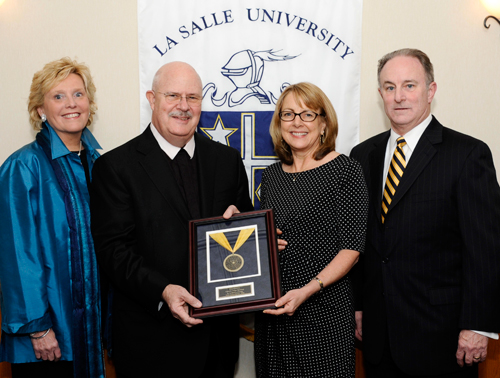 PHILADELPHIA (CNS) — La Salle University gave one of its highest honors, the Signum Fidei Award, to Catholic Relief Services for its humanitarian outreach around the world.

The university’s Alumni Association presents the award each year to an individual or organization “that has made noteworthy contributions to the advancement of humanitarian principles in keeping with Christian-Judeo traditions.”

Its name means “Sign of Faith,” the motto of the Christian Brothers, the order that founded and operates La Salle University in Philadelphia. The school is celebrating its 150th anniversary with a year of special events and activities.

The work of CRS, the U.S. bishops’ overseas relief and development agency, is “truly the embodiment of (the) Gospel verse … ‘Whatever you did for one of these least brothers of mine, you did for me,'” said Beth Briglia, vice president of La Salle’s Alumni Association.

Joan Rosenhauer, executive vice president of U.S. operations for CRS, accepted the award on behalf of the agency.

“We share La Salle University’s values of service to the poor and upholding education as the path to a better future,” she said, pointing to CRS support for several education programs, “from Haiti to East Timor; from Burkina Faso to Madagascar.”

CRS has partnered with La Salle through the Global Justice Forums, Global Solidarity Network, and has trained staff and students for the CRS ambassador program. CRS ambassadors are a liaison between their community and CRS, with responsibility for keeping the community informed and involved with the U.S. Catholic Church’s efforts to end poverty in the world.

PREVIOUS: For a century, parish brings a taste of Italy to Conshohocken