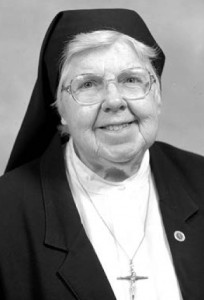 Born in Philadelphia Sister Mary Ellen entered the Congregation of the Sisters, Servants of the Immaculate Heart of Mary in 1944 from St. Henry Parish in Philadelphia, and professed her first vows in 1947. She received her Bachelor of Arts degree from Immaculata University and Master of Arts and Doctor of Philosophy from Notre Dame University.

Sister Mary Ellen taught in the secondary schools in the Archdiocese of Philadelphia, including 17 years at Little Flower High School, and in the dioceses of Allentown and Metuchen, at Immaculata University and Villa Maria College, Lima, Peru.

In 1987 she began the first I.H.M. Literacy Program at Incarnation of Our Lord Parish in Philadelphia. In 2002 she was assigned to Camilla Hall where her ministry was the apostolate of prayer.

The funeral Mass was celebrated at Camilla Hall Dec. 19. Father William Dean was the celebrant and homilist. Interment followed in the Immaculata Cemetery.

In addition to the members of her religious community, Sister Mary Ellen is survived by a sister-in-law, Rose Eckardt and a cousin, Sister Miriam Robert, I.H.M., nieces, nephews, grandnieces and grandnephews. She was predeceased by her parents, Charles and Ellen Heinze Eckardt and her brother, Charles.

NEXT: Msgr. Wendrychowicz, 65, pastor of Sellersville parish, laid to rest