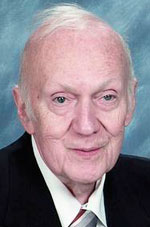 Deacon James A. Thompson, 82, a retired permanent deacon who had been assigned to Stella Maris Parish in Philadelphia, died Dec. 13.

Born in Philadelphia, he graduated from La Salle College and served in the United States Navy from 1952 to 1956. He was a federal civil service employee for 39 years, and to further his career with the Defense Contract Audit Agency he studied contract law at Temple University.

Married to the late Charlotte R. (Kirkpatrick) Thompson, he is the father of Kevin and the late Colleen Thompson.

He retired early from the federal government even though he loved his work after he decided to enter the diaconate, and he was ordained deacon on June 6, 1999 by Cardinal Anthony Bevilacqua at the Cathedral Basilica of SS. Peter and Paul and assigned to his home parish, Stella Maris.

In the highest compliment anyone can bestow, his son Kevin said, “my Dad was more like Jesus then anyone I have ever met.”

He recalled how his father in the spirit of the diaconate would “do food shopping for shut-ins, set up their medicines and make sure they had everything they needed,” he recalled. “He did this until he was too sick himself.”

He remembers how his dad, as school tuition coordinator for the parish, especially as the enrollment declined would find scholarship money for needy families. “It mostly came out of his own bank account,” his son said. “He didn’t tell anyone, not even the pastor.”

“He was a holy man, very charitable. He was completely fascinated by the charity of Christ,” said Msgr. James Connelly, pastor emeritus of Stella Maris, who was well aware of what his tuition coordinator was doing. “He would lend people money to pay their tuition and he would never get paid back. I told him not to do it, but he would do it anyway.

“He took care of a black man in the parish and also an elderly woman. At his funeral I was looking at the sanctuary bells. He gave them in memory of his daughter when she died. That was the beginning of our sanctuary fund.”

St. Joseph Sister Veronica Maier, parish services director at Stella Maris, remembers “Jim was a thoroughly good person he and his wife went through diaconate training together. They had a sacred life together and they prayed the office together.”

“I worked with him in RCIA,” Sister Maier said. “He had a nice relationship with people.”

In addition to his son, Deacon Thompson is survived by his daughter-in-law Lisa; grandchildren Erik, Ryan and Megan, and his brother, Thomas.