Thousands from Philadelphia join youth-heavy March for Life in D.C. 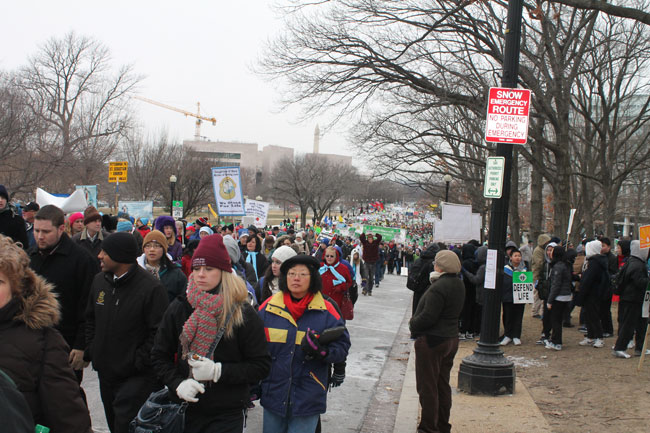 UPDATE — You didn’t read about it in your local newspaper or see a televised report. The fact is at least 2,000 Catholics from the Philadelphia area were among the vast throng in Washington, D.C., on Jan. 25 to witness against the killing of the unborn, in conjunction with the 40th anniversary of the Roe vs. Wade Supreme Court decision declaring abortion legal throughout the land.

Some 13,000 clogged the Basilica of the National Shrine of the Immaculate Conception the previous evening for the celebration of Mass before the Vigil for Life which preceded the next day’s rally and march.

(See a video from the rally)

For many Philadelphians the kickoff was on the morning of the 25th through the attendance of another Mass for about 5,000 at the same basilica with Archbishop Charles Chaput as principal celebrant.

“This Mass today, like every Mass, is called a celebration of the Eucharist,” the Archbishop said in his homily. “If we look without sentiment at the direction of our nation some of us here might not feel very thankful. This is a time when our national leadership is committed to policies both at home and abroad that are gravely evil.”

Archbishop Chaput likened the 40 years since the Roe decision to “40 years wandering in the desert.”

Because of the presidential inauguration early in the week, the traditional Roe observation was not held on Jan. 22 but on Jan. 25. The date was perhaps especially apt because it was the date the Church celebrates the Conversion of St. Paul.

“I think today’s readings, a celebration of the conversion of St. Paul, teach us to be optimistic despite all of the abortion industry’s lies, despite disdain of the mass media and the complicity of many of our elected officials,” the Archbishop said. “Here we still are 40 years later. We still march. We still witness. We still save irreplaceable lives by our efforts. We still sustain each other in fidelity to God’s words, ‘Choose life.’”

After the Mass those who could get close enough heard various speakers at the noon rally on the Washington Mall. Among them were House Speaker John Boehner via telecast, and live were New Jersey Congressman Chris Smith and former Pennsylvania Senator Rick Santorum, who spoke eloquently of his daughter Bella, born with severe genetic disorders but nevertheless a gift to his family. 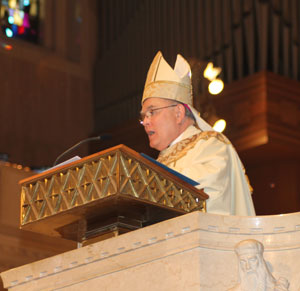 The real stars of the day were the many, many thousands who jammed the streets for the march past the Capitol ending by the Supreme Court Building.

What was most noticeable was the continued growth each year in numbers of young people, many with banners proclaiming they are the Pro-Life Generation.  It wasn’t just high school students but college students, many of whom first attended the march during their high school years. Villanova University had 67 students at the march, including Collin Sceski, who indeed started during his high school years.

“Inside I’m saddened, but outside I’m joyful,” he said. “If you are not evangelizing with joy you are not going to reach anyone. I march because it is the right thing to do.”

Amelia Bult, a senior at Princeton, is from Kalamazoo, Mich., but she was at the march with a group from St. Andrew Parish in Newtown. “I’ve been here before, and I’m here because I believe in the dignity of the human person,” she said.

Other young adults at the Archbishop’s Mass and the Rally and March were 100 or so seminarians from St. Charles Borromeo Seminary led by their rector, Bishop Timothy C. Senior.

“It’s always inspiring to see so many young people here,” Bishop Senior said. “The enthusiasm, the energy and the conviction of the next generation gives us hope. It is really inspiring to be with them.” 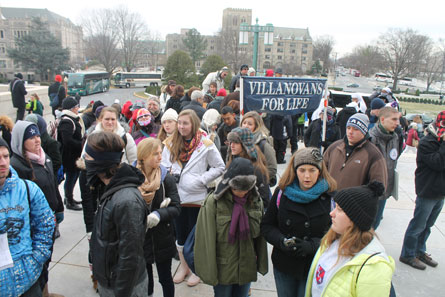 Parish groups are another big part of the Philadelphia-area contingent.

“It’s a privilege to be here today to help support this cause and it is admirable to see so many other folks here,” said Maryanne Squyres, who attended with her husband Frank and their pastor, Father Francis Groarke of St. Thomas the Apostle Parish, Glen Mills.

“I’m here to stand up for life,” said Joe Gyarske at his third march and one of 47 on a bus from St. John the Evangelist Parish, Morrisville. “There is a long way to go, but I think the tide is turning.”

“I’ve been coming for about 30 years,” said Alfred Hales, one of a group from St. Jude Parish in Chalfont. “It’s for the sanctity of human life and I wouldn’t miss it.”
Some had come the previous day just so they could participate in the Jan. 24 Vigil Mass at the Basilica of the National Shrine of the Immaculate Conception, and Bishop John McIntyre was among them.

“As usual, the place was packed with young people. I think the median age was about 23,” he said. “This has to be the longest-standing march in the history of our nation that maintains itself. The commitment of the people to the cause is tremendous.”

Caoimhe Mannion, an eighth grader and one of 25 students who traveled down from SS. Simon and Jude Parish in West Chester, observed, “Abortion is physical murder. It is a life and it is basically murder.”

Among the group from St. Denis, Havertown, were Jim Coffey, the vice president of the Papal Foundation and his wife, Felicia and two young daughters Monica and Elena. Both children were physically exhausted by day’s end. “They pray every night for the end to abortion,” their mother said.

Tom Rice, publisher of the former Philadelphia Bulletin newspaper, was also among the St. Denis in Havertown group as was his daughter, Charlotte, a junior at Sacred Heart Academy, Bryn Mawr.
“This is a good thing, it shows we care about it,” she said.

Andrew Hagan, a junior and one of 70 coming from Bishop McDevitt High School, was on his third March for Life. “It’s a very spiritual experience seeing all of these people from around the country gathering for this great cause,” he said.

As usual, the contingent from Archbishop Ryan High School was more like a brigade – 136 strong.

“After four years of marching it was important to show our underclassmen that even in the cold we have to stand for our faith,” said senior Kathleen Salinel, president of the school’s pro-life group. “Our youth today do care and the lives that have been killed could have made a difference in society’s future.”

Roman Catholic High has been sending a delegation for years and this year was no exception, with 86 students in Washington. “My sister told me this is a good experience,” said freshman Paul Kletzel. “It’s a great cause and especially worthwhile.”

Let’s hear it for the veteran marchers too, and John Stanton, the former president of the Pro-Life Union of Southeastern Pennsylvania has made almost every march since it started. “It’s our duty as Catholics to influence the nation and our citizens to stop this slaughter, and having it on the feast of St. Paul is of special significance.”

In hindsight, Steven Bozza, director of the archdiocesan Office for Life, Family and the Laity, said, “My gut reaction to the whole thing was I was just elated to see all the young people there. They outnumbered everybody else. I would like to personally thank everyone who helped. We had about 3,000 people there from the Archdiocese, not counting those who came on their own.”