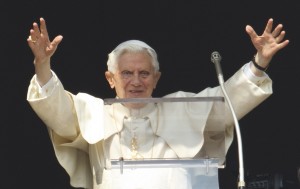 Pope Benedict XVI waves as he arrives to lead the Angelus from the window of his apartment overlooking St. Peter’s Square at the Vatican Feb. 17. (CNS photo/Paul Haring)

The retirement of Pope Benedict XVI and the conclave to elect a new pope will take place in Rome but plans to pray for both are underway in the Archdiocese of Philadelphia.

Top among them is a Mass to be celebrated 6:30 p.m. Sunday, Feb. 24 for Pope Benedict at the Cathedral Basilica of SS. Peter and Paul in Philadelphia.

Archbishop Charles Chaput will be celebrate and preach the homily for the Mass, to which everyone is invited to attend and priests are invited to concelebrate.

The Mass comes only four days before the pope resigns officially at 8 p.m. Rome time on Feb. 28.

According to a Feb. 18 memo to all priests from the archdiocesan Office for Worship, all Catholics in the archdiocese are encouraged to pray special prayers in the last days leading up to Pope Benedict’s retirement.

The Prayer of the Faithful during Mass should include the petition that reads, “That Pope Benedict XVI, who has served the Church faithfully as supreme pastor, may know deep peace and consolation as he turns to a life of prayer for the church, let us pray to the Lord.”

Prayers for the pope should also be included at Mass for the Feast of the Chair of St. Peter the Apostle on Friday, Feb. 22.

Before the retirement begins, the pope should also be remembered by Catholics praying any devotion, such as the rosary, using the following verse-and-response formula as suggested by the Worship Office:

“V: Let us pray for our Sovereign Pontiff Benedict.”
“R: The Lord preserve him and give him life, and make him blessed upon the earth, and deliver him not to the will of his enemies.”

After 8 p.m. on the 28th, the Church enters the period of “sede vacante,” or vacant seat of the pope, during which Catholics are encouraged to pray for the cardinals electing the new pope in a conclave whose start date has not yet been announced.

Archbishop Chaput will again lead the effort by celebrating Mass at the Cathedral at 6:30 p.m. Sunday, March 3. All faithful and clergy are invited.

The Prayer of the Faithful should include the following suggested intention:

“That the College of Cardinals, under the guidance of the Holy Spirit and supported by the prayers of all the members of the Church, will elect a supreme pastor prepared for the demands of our time.”

Once the new pope has been elected, Archbishop Chaput will soon after celebrate a 6:30 p.m. Sunday Mass at the Cathedral.

At that time, the Prayer of the Faithful at Masses throughout the Archdiocese should include this intention:

“That our newly elected Holy Father, Pope (N), supported by the prayers of all the Church, will be received as Peter among us to build up the Body of Christ with the Word of salvation.”

The Worship Office encouraged schools and religious education programs at all levels, and other institutions in the Archdiocese, to arrange where possible additional “occasions for the Liturgy of the Hours or a Liturgy of the Word or Eucharistic Exposition or devotional prayer,” in addition to the celebration of daily Eucharist, to pray for Pope Benedict, the cardinals and the new pope.

For more details contact the Office for Worship at 215-587-3537 or via email at worship@adphila.org.

NEXT: Biographer: In past six months, pope was ‘exhausted and disheartened’