Permanent deacons to see changes for ministry, formation in Archdiocese 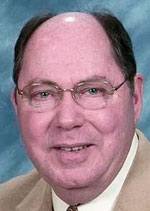 Deacon James Owens, director of the Office for Permament Deacons and dean of the Permanent Diaconate Division at St. Charles Borromeo Seminary, where formation of deacon candidates takes place.

Permanent deacons are a growing presence in the Church of Philadelphia. Under new rules promulgated by Archbishop Charles Chaput on Feb. 13 and effective March 24, theirs will be a much more visible presence in the future.

First of all, especially in parishes that have assigned permanent deacons, they have been delegated to witness (assist at) any wedding performed outside of a Mass. Special permission must be obtained to witness at a wedding outside of their assigned parish, and all marriages performed in a Mass must be done by the priest-celebrant.

Second, deacons are to wear clerical garb in performing their clerical duties; in this case a gray clerical shirt with a white collar.

In the past the only distinctive garb worn by deacons was a vestment called a dalmatic, worn during liturgical celebrations.

The clerical shirt may not be worn outside a deacon’s official duties, for example at social events or secular employment.

Third, the upward age men can be admitted to the deacon formation program has been raised from 50 to 55. There can be certain exceptions for older men under certain circumstances.

“An important part of the life and work of the Church in the Archdiocese of Philadelphia is the work of our permanent deacons,” Archbishop Chaput said in a letter to all priests and deacons. “Since becoming your Archbishop, I have discussed several topics I consider important for the permanent diaconate within our local Church. These include especially witnessing marriages, clerical attire and the age of admission for formation.

“I have recently approved changes regarding these areas and others after consultation with many, including the Council of Priests. All of these changes will take effect on Palm Sunday of the Passion of the Lord, March 24, 2013.”

Another change mentioned by the Archbishop will not take place until July. Formation for candidates for the permanent diaconate will move to the Permanent Diaconate Division of St. Charles Borromeo Seminary and ongoing formation and personnel-related matters will move to the Office for Clergy.

At this time Philadelphia has 196 permanent deacons in active ministry. But including retired deacons who often remain active in their parish, the number is approximately 225, according to Deacon James T. Owens, director of the Office for Permanent Deacons and Dean of the Permanent Diaconate Division of St. Charles Seminary.

He estimates about 90 percent of the active permanent deacons also have secular employment. While clerical garb and a general permission to witness at marriages outside of Mass for permanent deacons is new to Philadelphia, most other dioceses and archdioceses already do this, Deacon Owens explained.

“Deacons are collaborators in ministry with the priests of the Archdiocese and are ordained to serve the people of God,” he said. “These changes will make the deacon’s clerical status more consistently apparent to the lay faithful and enhance the service that deacons offer.”

Deacon Mark Dillon, a permanent deacon in ministry at Mother of Divine Providence Parish in King of Prussia and recently retired from his secular career, is five years ordained. He believes the new directives recognize the service of deacons as being distinct from that of priests.

“Their ministry must be prominent, public and permanent,” he said.

The granting of permission for deacons to witness marriages outside of Mass “is helpful and emphasizes this,” he said. But as a practical matter, since most Catholic marriages take place within Mass, the number of instances where it happens will be relatively few, he thinks.

NEXT: Catholics in Archdiocese asked to offer prayers for Pope Benedict, cardinals