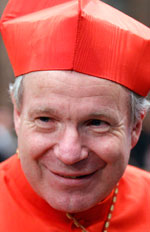 Whether it was the controversy of clergy dissenting over church teachings, massive parish closings or the scandal of clerical sex abuse, the 68-year-old theologian is quick to wield his diplomatic and administrative abilities and create an atmosphere of openness and dialogue.

He is at the forefront of calling for a new evangelization that is “less theoretical” and more personal, simple and direct.

“Nothing can replace the personal meeting, contact and witness — listening and witnessing; we have to look at how Jesus did it. He is the master of evangelization,” he told Canada’s Salt and Light TV during the Synod of Bishops on the new evangelization.

The cardinal, who has been president of the Austrian bishops’ conference since 1998, has seen the number of Austrians leaving the church increase substantially in recent years.

When the Vienna Archdiocese announced plans last year to reduce its parishes by more than 75 percent over the next 10 years, Cardinal Schonborn accentuated the positive. He said the reorganization — prompted by falling numbers of clergy and laity — would help pool resources, reduce administration and “leave more time for evangelization.”

“We have to free ourselves of the traditional image that the church is present only where there’s a priest and stress the common priesthood of all baptized,” he told reporters at a news conference last October.

He said he was not suggesting “priestless eucharistic liturgies,” as a group of Austrian priests were requesting, but a reinvigoration of the sense of mission, where the baptized give true witness to their faith at work, at home, in society and in small Christian communities.

Cardinal Schonborn has been trying to hold together the archdiocese almost since he was installed, guiding a difficult dialogue with dissident groups and disaffected Catholics.

In 1995, Austrian Catholics launched a global movement to enact changes in lay participation in church decision-making, priestly celibacy and the exclusion of women from the priesthood.

Those strains worsened in 2011 when a group of priests organized a “Call to Disobedience,” a declaration that has been signed by nearly a tenth of Austria’s 4,200 Catholic priests.

The cardinal has condemned the initiative, but has chosen trust and dialogue over censure of the members. He admitted, however, that some people have argued the Austrian bishops have been “too patient” in dealing with the movement.

“The movement is mostly made up of priests of the 1968 generation,” which means that “many of them are suffering,” the cardinal told the Italian daily La Stampa last May. “We all agree on the diagnosis: there is a crisis. What we disagree on is what cure to use.”

The cure, he said, is “a rediscovery of faith which accepts being the light of the world.”

The cardinal had to deal with the reality of sexual abuse by clergy right at the start of his tenure as archbishop. Named coadjutor archbishop in the spring of 1995, he replaced the archbishop, Cardinal Hans Hermann Groer, just five months later, after the late cardinal was forced to step down amid allegations by former students that he had sexually abused them as youths in the 1970s. Cardinal Schonborn also has dealt with a pornography and sex scandal at the St. Polten seminary

Last year, he overruled one of his parish rectors and approved the election of a practicing gay Catholic to a parish council. He told the Italian daily La Stampa that, in his opinion, the man was on a path toward change.

The cardinal, who speaks German, English, Spanish, French, Italian, and Latin, has an active account on Facebook. He also responds to people’s video questions about the church in a weekly video posted on YouTube and the website “Ask the cardinal,” www.fragdenkardinal.at.

Best known as the principal editor of the Catechism of the Catholic Church, the cardinal has known Pope Benedict XVI for nearly four decades, including as one of the pope’s doctoral students.

The cardinal played a key role in the creation of the Compendium of the Catechism of the Catholic Church; he was a member of the commission charged with text’s preparation, and he formally asked Blessed John Paul II to approve the compilation of a “minicatechism,” saying the current volume of more than 2,800 articles of church teaching was too ponderous for many Catholics.

Most recently, Pope Benedict charged him with overseeing the creation of the “YouCat,” a supplement to the catechism created for young people.

Born Jan. 22, 1945, the second of four children into a noble family of Bohemia, a region that later became Czechoslovakia, Christoph Schonborn entered the Order of Preachers at the age of 18. He studied at Dominican schools and universities in Austria, Germany and France. His postgraduate studies included philosophy, theology, psychology and Byzantine and Slavic Christianity. He became a priest in 1970.

Then-Father Schonborn went on to further studies and academic positions in Austria, Switzerland and France and joined several theological commissions.

Blessed John Paul II appointed him auxiliary bishop of Vienna in 1991 and coadjutor archbishop in April 1995. He was elevated to the College of Cardinals in 1998.He belongs to several Vatican congregations and councils, including the Pontifical Council for Promoting New Evangelization.

PREVIOUS: Cardinal Sandri on those who doubt church: ‘We must prove them wrong’

NEXT: Milan cardinal’s theological expertise is focused on culture, family