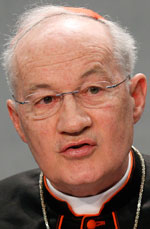 VATICAN CITY (CNS) — With extensive experience in Latin America, the Vatican and his home province of Quebec, Canadian Cardinal Marc Ouellet possesses broad knowledge of the universal church as well as strong pastoral and leadership skills from serving as the former primate of Canada.

Today the 68-year-old cardinal leads the Congregation for Bishops — the office that helps the pope choose bishops for Latin-rite dioceses around the world. With his appointment by Pope Benedict XVI in 2010, he became the first North American cardinal to be placed in charge of the powerful congregation.

The post gives him a broad perspective of the universal church and the world’s bishops, and it put him in a close, collaborative working relationship with Pope Benedict with their weekly meetings evaluating potential new bishops.

The cardinal also serves as president of the Pontifical Commission for Latin America, serving as an important conduit linking the region where half of the world’s Catholics live with the different offices of the Roman Curia. He knows Latin America well from a decade of working in Colombia as a missionary, rector of a major seminary and professor.

He has a reputation as a hard worker and an inspiring, well-respected theologian whose teaching is close to that of Pope Benedict. He is able to be both humble and soft-spoken while courageously speaking out against the moral evils present in the world, from abortion to clerical sex abuse.

Cardinal Ouellet and 10 other bishops led a penitential vigil in Rome last year asking for forgiveness for failing to protect children and serving instead as an “instrument of evil against them” when Catholic officials shielded perpetrators from justice.

He spoke to priests in 2010 about an “unprecedented wave of challenges against the church and the priesthood following the revelation of scandals whose gravity we must recognize and sincerely work to repair.” That speech came when he was one of only two cardinals chosen to deliver major speeches to the two-day World Meeting of Priests that preceded the closing of the Year for Priests with Pope Benedict.

Pope Benedict has given him a number of other high-profile appointments over the years that required strong organizational and consensus-building skills, such as when he was named the recording secretary during the world Synod of Bishops on the Bible in 2008.

He has said his time as secretary at the Pontifical Council for Christian Unity, 2001-2002, taught him the “need to develop a reflex of respect for others, and we must avoid simplification and prejudice. We cannot stereotype Islam as a religion of terrorism, for example. We must move toward a climate of fraternity.”

When Blessed John Paul II named him archbishop of Quebec in 2002 at the age of 58, the La Motte native had never had any experience of being a local bishop. He had been shuttling between Colombia and Rome for teaching, studies and curial appointments for decades.

The shock he felt of being appointed to Quebec was followed by profound concern for the dismal picture he found there: high rates of divorce and suicide and a dwindling and aging Mass-going population.

He believed one way to rescue Quebec from the reigning secularism lay not only in recovering its Christian roots, but also in proactively engaging young people in opportunities to encounter Christ.

In a 2012 interview with Canada’s Salt and Light TV, the cardinal said he remembered how important God was in his own youth, so “I had to give priority to the youth and involve them in many ways,” to help them discover “the meaning, the religious meaning of life.”

His uncompromising defense of human life triggered attacks and controversy in the secular media and political world, particularly when he called abortion a moral crime even in cases of rape. However, his unwavering stance prompted admiration from church leaders.

Fluent in French, English, Spanish, Italian and German, Cardinal Ouellet is reportedly also a singer, a swimmer, a hiker and a hockey lover.

He is a member of the Society of St. Sulpice, whose members are, strictly speaking, diocesan priests, but the society’s members are is normally considered part of a religious order.

Born June 8, 1944, in La Motte, Quebec, he earned a degree in theology from the University of Montreal in 1968 and was ordained a priest for the Diocese of Amos. He joined the Sulpicians in 1972 and was sent to Rome to study philosophy at the Pontifical University of St. Thomas Aquinas.

He taught at seminaries in Colombia and Montreal before earning his doctorate in dogmatic theology from Rome’s Pontifical Gregorian University in 1983.

He later served as rector of seminaries in Manizales, Colombia, in Montreal and in Edmonton, Alberta, before returning to Rome to teach. He was later appointed chair of dogmatic theology at the John Paul II Institute for Studies on Marriage and the Family at Rome’s Pontifical Lateran University.

He was archbishop of Quebec from 2002 to 2010 and named a cardinal in 2003. He participated in the conclave that led to the election of Pope Benedict in 2005 and was described by some as a “dark horse” candidate that year. He still remains a key Vatican official occasionally mentioned in talk of the upcoming conclave.

He is a member of multiple Vatican offices, including the Congregation for the Doctrine of the Faith.