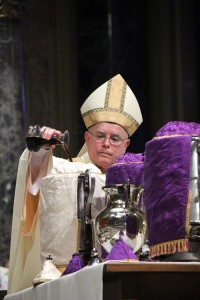 Archbishop Charles Chaput prepares the Holy Oils before blessing them at the 2012 Chrism Mass at the Cathedral Basilica of SS. Peter and Paul. (Sarah Webb)

(B)y the anointing of the Holy Spirit you made your only begotten Son high priest of the new and eternal covenant, and by your wondrous design were pleased to decree that his one priesthood should continue in the Church.

For Christ not only adorns with a royal priesthood the people he has made his own, but with a brother’s kindness he also chooses men to become sharers in his sacred ministry through the laying on of hands.

They are to renew in his name the sacrifice of human redemption, to set before your children the paschal banquet, to lead your holy people in charity, to nourish them with the word and strengthen them with the sacraments.

As they give up their lives for you and for the salvation of their brothers and sisters, they strive to be conformed to the image of Christ himselfand offer you a constant witness of faith and love.

— From the Preface prayer for the Chrism Mass, Roman Missal

Readings for the Chrism Mass

An FAQ from the U.S. Conference of Catholic Bishops on blessing of oils and renewal of priestly promises.

Pope Benedict XVI’s homily of April 5, 2012 for the Chrism Mass, during which he encouraged priests on the day commemorated for the institution of Holy Orders.

PREVIOUS: Holy Thursday, the Mass of the Lord’s Supper