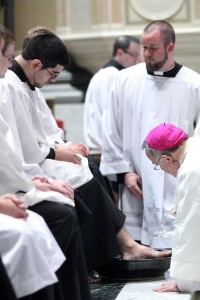 Archbishop Charles Chaput washes the feet of seminarians at the Mass of the Lord’s Supper on Holy Thursday 2012. (Sarah Webb)

Therefore Lord we pray: graciously accept this oblation of our service, that of your whole family, which we make to you as we observe the day on which our Lord Jesus Christ handed on the mysteries of his Body and Blood for his disciples to celebrate; order our days in peace, and command that we be delivered from eternal damnation and counted among the flock of those you have chosen.

— From the Eucharistic Prayer, Mass of the Lord’s Supper, Roman Missal

Readings for the Mass of the Lord’s Supper

A reflection on Holy Thursday by a Columban missionary priest

The Gregorian chant hymn “Tantum ergo,” in Latin by Benedictine monks in Brazil, and the hymn “O sacrum convivium” by the Cambridge Singers (with visual text setting of the lyrics by St. Thomas Aquinas) both of which may be sung during adoration and reposition of the Blessed Sacrament during this Mass.

PREVIOUS: Good Friday, the Passion of the Lord

NEXT: Holy Thursday, the Chrism Mass