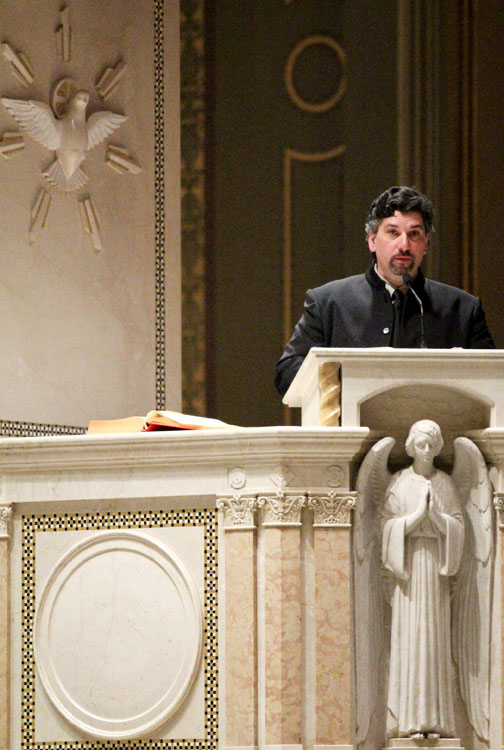 Argentinian lector Claudio Grieco from Saint Martin of Tours Parish read the second reading during Mass, at which the people prayed for Pope Francis. (Sarah Webb)

Despite the liturgy having the readings of the Fifth Sunday of Lent, Archbishop Charles Chaput’s usual 6:30 p.m. Sunday evening Mass on March 17  took on a festive air, as it was designated a Mass of Thanksgiving for Pope Francis. He was elected the Successor to St. Peter on March 13.

At the outset, Archbishop Caput gave recognition to the ecumenical representatives in attendance, as well as a number of Jesuit priests present including Father C. Kevin Gillespie, president of St. Joseph’s University.

“Our new pope, Pope Francis, although he has a Franciscan name is a Jesuit and in a very special way we would like to honor them for the gift of this man’s life and formation in a community leading to the moment of being chosen Pope,” Archbishop Chaput said.

The Archbishop spoke of his own acquaintance with Pope Francis, the former Cardinal Jorge Mario Bergoglio and displayed the picture of Mary Undoer of Knots that he has kept on his desk for years since it was given to him by Cardinal Bergoglio.

“He is an extraordinary man, a man of deep humanity, extraordinary kindness and a huge commitment to caring for the poor,” Archbishop Chaput said. “I am sure he will call the Church to a new kind of renewal as is the case of every pope we receive through the gift of the Holy Spirit. We gather together tonight at the beginning of his ministry as the successor to St. Peter to pray for him.”

But nevertheless it was still the Fifth Sunday of Lent. As is his practice, Archbishop Chaput gave a thorough explanation of the day’s readings that was thought-provoking, perhaps especially so in the Gospel account of the woman caught in adultery, when the Pharisees asked if she should be stoned.

“Jesus gave them (the Pharisees) an opportunity to think differently and to begin to live differently without condemnation of others,” he said.

Many of the people at the Mass were there primarily to honor our new Pope Francis and to pray for him.

Speaking for his own denomination, Bishop David Hicks, Bishop of the Northeast Anglican Church of North America, said, “We are very pleased by Pope Francis. We understand from one of our retired Anglican bishops in South America the pope is quite cordial to Anglicans. We rejoice with you.”

Gosia Siestezczitowska was born in Poland and attended Sunday night’s Mass with a Hispanic friend.

“It’s good to see a Hispanic pope,” she said. “You saw the impact Pope John Paul II had on the Polish people. I feel Pope Francis will have the same impact on the Americas.”

PREVIOUS: Devotion to Mary in painting spreading from Latin America to Philadelphia, by way of Pope Francis