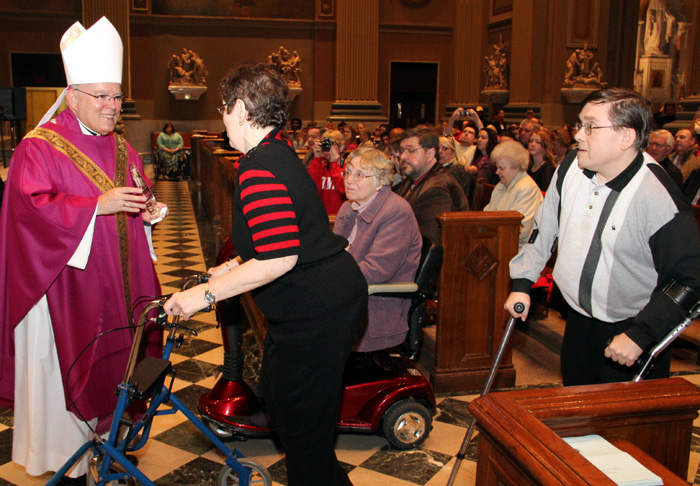 Archbishop Charles Chaput, celebrant for the annual Mass for Persons with Disabilities, their families and caregivers, presents one of two awards to Theresa Breward, Barbara Walter and Vincent Rozanskiafter Mass to organizations that support people with disabilities. The Mass was celebrated March 23 at the Cathedral Basilica of SS. Peter and Paul, Philadelphia. (Photos by Sarah Webb) 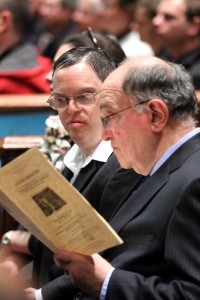 Ian Ritrovato(left) from Don Guanella Village reads along with his father Sal at Mass on Saturday, March 25. The facility run by archdiocesan Catholic Social Services serves up to 131 developmentally disabled men.

It’s an honor for an altar server to hold the book for the archbishop during a special liturgy. The young man who held the Missal during the liturgy for Archbishop Charles Chaput during the Mass for Persons with Disabilities at the Cathedral Basilica of SS. Peter and Paul on March 23 truly felt the honor.

“He kept saying ‘Alleluia, Alleluia,’” the archbishop noted in his homily. “You are not supposed to say Alleluia during the six weeks of Lent. It’s something we give up until Easter.”

But in this case it was very appropriate, he suggested, because “we are celebrating the victory of life over death, the victory of self-giving over self-centeredness, and although it isn’t Easter, in our hearts we can really say, ‘Alleluia, may God be praised for this glorious day and for this glorious moment when we see the gifts that we see in our surrounding life.’”

The cathedral was crowded for this annual liturgy, one that recognizes people who have what are usually called disabilities, as well as their families and caregivers.

The opening prayer also referred to a “chosen race and a royal priesthood,” Archbishop Chaput noted.

“Chosen means we are not accidents, that God picked us, picked us out, created us because he loved us just as we are – a chosen race. Also we are a royal priesthood.”

A priest, he explained, is not just the priest who offers Mass, it is someone who offers gifts to God on behalf of the people. “Because of our baptism God has chosen all of us, all of us here as his priests.”

Those who were honored at the Mass, persons with disabilities, “are a chosen race and God loves them for who they are, with their special gifts of friendliness, of love and of tenderness, of simplicity,” the archbishop said.

“There are so many adjectives we could use to describe these chosen people and we thank God for having placed them in our lives as a member of our family or a people that God has invited us to walk with and to serve.”

Persons with various types of mental or physical disabilities were represented in various roles through the Mass. After the Mass special awards were given to groups active in ministries to persons with disabilities. 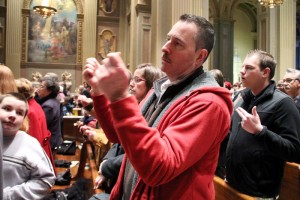 Tom Connolly, who is hearing impaired, came from Woodbrook, N.J., for the Mass celebrating persons with disabilities.

They included the Catholic League of Persons with Disabilities, which plans and assists at liturgies and retreats for persons with disabilities, and the Our Lady of Confidence retreat at Malvern Retreat House, both of which are celebrating 50 years of service in the Archdiocese.

Also honored was Msgr. Richard T. Bolger, who has made ministry to persons with disabilities an integral part of his entire priesthood.

The annual Mass is part of the Secretariat for Evangelization and specifically the offices of Pastoral Care for Persons with Disabilities and the Deaf Apostolate headed by Immaculate Heart Sister Kathleen Schipani.

“I always think it is the real Body of Christ when people with disabilities come together in the Eucharist,” Sister Kathleen said. “It is an exciting event for all of the people and their families when they come. I think they feel the presence of God and the presence of the Church in their midst.” 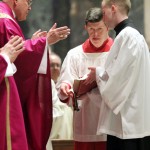 PREVIOUS: Thousands, including Philadelphians, expected to march for marriage Tuesday