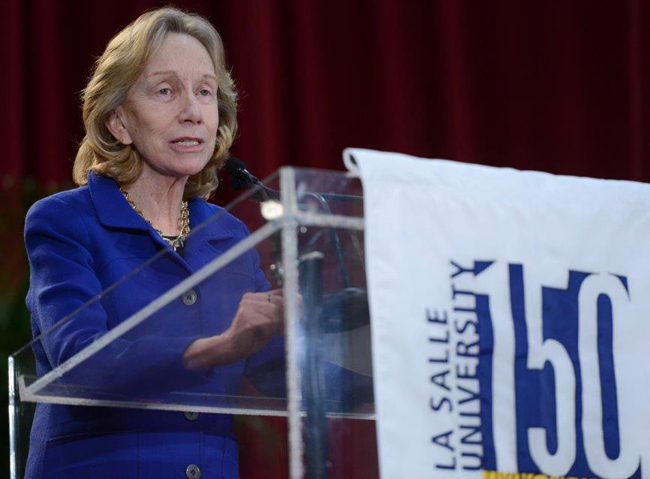 On the surface it would seem odd.

A university celebrates its 150th anniversary by bringing in a Pulitzer Prize-winning Harvard PhD. to lecture on a man who by his own estimate had less than a total of 12 months formal education in backwoods schoolhouses.

The university was La Salle University, the lecturer on March 21 was historian Doris Kearns Goodwin and the subject was Abraham Lincoln, generally considered America’s greatest president.

(See related story: Kearns Goodwin recalls growing up Catholic in Brooklyn, with a peculiar penance: praying for the Dodgers)

The hook was La Salle was founded in 1863, the year of Lincoln’s most notable triumphs: the Emancipation Proclamation, which was the prelude to the total abolition of slavery later in his administration; the battle of Gettysburg, which helped turn the tide of the Civil War; and his crowning oratorical achievement, the Gettysburg Address.

Goodwin’s topic was supposed to be Philadelphia during the Civil War, and she did give passing reference to it — for example 100,000 Philadelphians saw service in the war and about 20,000 were killed. Philadelphia produced two Union commanding generals – George McClellan and George Meade. Also Lincoln stopped in Philadelphia on his way to his inauguration to speak at Independence Hall.

“He was almost overwhelmed by emotion speaking where the Declaration of Independence had been adopted,” Goodwin said. “He said he never had a political feeling that night that did not spring from the Declaration, the idea that a new nation promised hope to the world — giving promise that all should have an equal chance, that artificial weight should be lifted from all men.”

Goodwin has a career that has virtually centered on presidential biographies, including Lyndon Johnson, John Kennedy, Franklin Roosevelt, Lincoln of course and upcoming, a two-for one: Teddy Roosevelt and his portly protégé and successor, William Howard Taft and their on again, off again, on again relationship.

Clearly, Lincoln is her favorite. Her “Team of Rivals: the Political Genius of Abraham Lincoln” earned her the Pulitzer, and the section of the book on his leadership during the fight for the Thirteenth Amendment that abolished slavery was the inspiration for Steven Spielberg’s recent film, “Lincoln.”

“Team of Rivals” was also at the core of the La Salle lecture, which was just fine with Kearns’ audience.

“No one is more fascinating than Lincoln,” she said of the president. “There is no one whose leadership style is more relevant to us.”

One of Lincoln’s outstanding qualities was his desire to accomplish something. “It wasn’t office or power, it was the desire to leave the world a better place,” Goodwin said. “If he did that he would live on.”

It was this unusual determination that caused him to run, usually unsuccessfully, for public office and undeterred by failure in 1860 for the biggest prize of all, the U.S. presidency. “It was the only office he hadn’t lost at the time,” Goodwin quipped.

Running for the nomination in the newly formed Republican Party, he was a definite dark horse.

“Everyone expected William Henry Seward, the governor and senator from New York, to be the nominee,” Goodwin said. “He was the most celebrated antislavery orator of his day. If not Seward, Salmon Chase from Ohio, one of the founders of the Republican Party, and if not Chase, Edward Bates, the elder statesman from Missouri.”

Although Lincoln was the least experienced of the candidates, “his unparalleled emotional strengths and political skills made the difference,” Goodwin said, adding he also campaigned harder.

Also the three more favored candidates were busy attacking one another; Lincoln attacked nobody, so when Seward barely missed the nomination on the first ballot, Lincoln, who had no enemies, was nominated on the third ballot because each of his rivals had bitter enemies. Finally because the Democrats split into North and South factions, Lincoln won the election.

As a candidate and in his early presidency Lincoln was not advocating immediate abolition of slavery, a position he gradually came to accept as the only moral choice.

Initially he supported the Republican platform, which sought to prevent slavery spreading to the western territories.

In the end, the Republican victory meant slavery would not spread, and this in itself caused the Southern States to secede, because they knew their diminished power in Congress would ultimately doom slavery.

Goodwin’s book “Team of Rivals” takes its name from Lincoln’s immediate policy when he assumed the presidency. He solicited each of his rivals for a cabinet post, and they accepted, some with the assumption he would just be a figure head and they would run the government.

“He was asked why he was doing this, and he said, ‘it’s simple, the country is in peril. These are the strongest and most able men in the country. I need them on my side.’

“Seward, Chase and Bates were able men, but in the end the prairie lawyer from Illinois was master of them all,” Goodwin said.

And we might say Goodwin is a master biographer. Spielberg’s “Lincoln” is an excellent film, but her “Team of Rivals” is far better and her lecture was just a tiny taste of it.

PREVIOUS: Persons with disabilities called ‘a chosen race’ at annual Mass in Cathedral

NEXT: Young woman’s disability makes her perfect volunteer to cheer the elderly