St. Patrick’s Day steps off with Mass before big parade 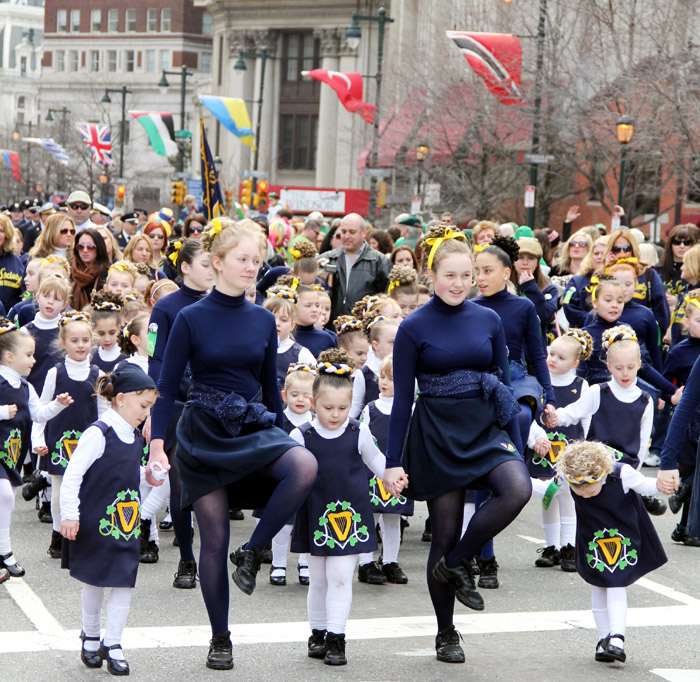 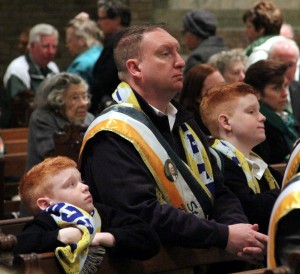 John Stevenson prays with his sons Michael and John at the Mass celebrating St. Patrick on Sunday, March 10 at St. Patrick Church, Philadelphia.

St. Patrick’s Day was officially observed a bit early in Philadelphia on Sunday, March 10 with a Mass — where else? — at St. Patrick’s Church near Rittenhouse Square. Of course, the huge parade followed.

Past, present and future were the themes of Archbishop Charles Chaput’s homily at the early morning Mass, and the past had special resonance because the annual celebration is really about honoring heritage.

(See our photo gallery from the Mass and parade, and a video with music from both)

“What you do today is not only honor your culture but honor your parents and grandparents, the wonderful women and men of faith who preceded you,” he said.

The archbishop, whose heritage is mostly Native American and French flavored with a bit of Irish, spoke of his own past custom through which he would honor his mother, who lived to the age of 97.

As do many people he sent her flowers on her birthday, but he also sent flowers on his own birthday, “in order to thank her for being a mother and sacrificing herself for me as she did,” he said.

Especially remembered at the Mass were two recently deceased stalwarts of the St. Patrick’s Day Association who lived their faith and tradition and served in leadership at the association for more than half a century.

Philip “Knute” Bonner, a retired Philadelphia Police Officer and Battle of the Bulge survivor, was a long-time executive board member. Paul Phillips was a past president, and 40-year treasurer for the group.

Harry Marnie, a board member, current treasurer and president of the Emerald Society, which is made up of police and firefighters, was the grand marshal for this year’s parade. Because the theme for the parade would be the Philadelphia Irish Memorial to the Great Famine, the Ring of Honor was composed of Philadelphians who are active in poverty and hunger programs.

“It’s a beautiful day and a great honor to Harry and all of the Ring of Honor,” said Chris Phillips, a lector at the Mass. Now vice president of the association, he is following in the footsteps of Paul, his father. 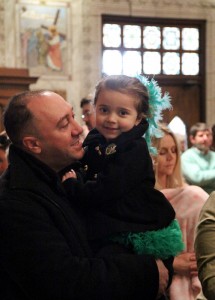 Madeline Ingulli is all smiles dressed in green while attending mass with her father CJ before the St. Patrick’s Day Parade.

As usual, the parade that followed did not disappoint. It was a glorious mixture of Ancient Order of Hibernians units, Irish bands, high school and grade school bands, kilted bagpipers, floats and dancers, especially children, from more Irish schools of dance than one could imagine.

The judges really had their job cut out for them in picking winners, and below are some of the awards they chose.

For the full list see Philadelphiastpatsparade.com, and if you missed the parade check out TV station CWPhilly 57, 1 to 4 p.m. on Sunday, March 17, St. Patrick’s Day. 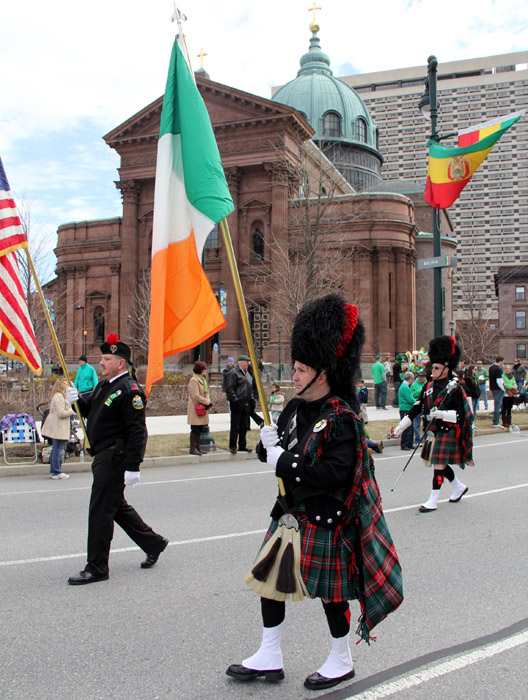 Philadelphia Police & Fire Pipes & Drums march past the Cathedral Basilica of SS. Peter and Paul during the St. Patrick’s Day Parade in Philadelphia.