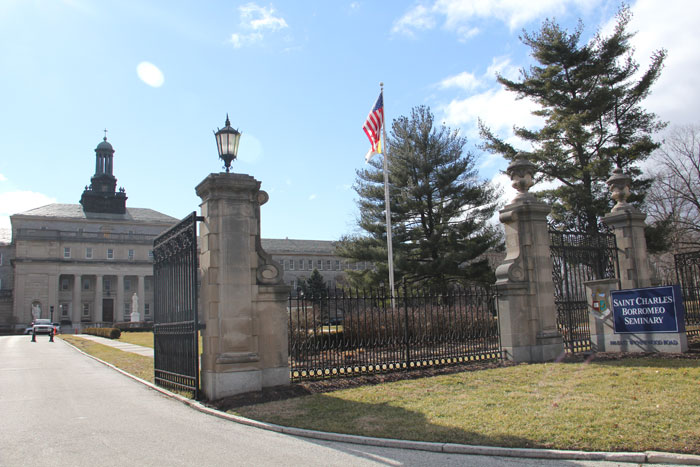 The front entrance to St. Charles Borromeo Seminary in Wynnewood, showing the College Division or lower side, which will be sold or leased in a plan for consolidation of the campus announced March 7. (Sarah Webb) 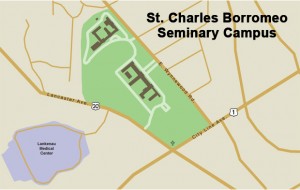 Archbishop Charles J. Chaput has announced in his March 7 weekly column on CatholicPhilly.com that the huge building that houses the lower side (College Division) at St. Charles Borromeo Seminary in Wynnewood, Lower Merion Township, will be closed and the seminary consolidated into what is now the upper side (Theology Division).

“St. Charles Borromeo Seminary is the heart of our Church in Philadelphia, and we remain dedicated to not only maintaining its presence in our community, but strengthening it for many generations to come. Our commitment to providing the best possible program of priestly formation for the benefit of our seminarians and the people they will one day serve is unwavering,” Archbishop Chaput said in a statement. “The plan being announced today will ensure the future viability and sustainability of our seminary now and in the future.”

(See a photo gallery with 20 images from the seminary campus.)

As part of the overall plan of consolidation, the seminary will seek to lease or sell underutilized buildings and property, but at the same time implement new spiritual and academic programs for seminarians and lay adult theology students.

The plan, which is expected to take three to five years to implement completely, will see the campus reduced from its present 75 acres to 30 acres.

The seminary, which was founded in 1832, has been at its present location since 1871. The gigantic lower side E-shaped building, with a frontage of 834 feet including St. Martin Chapel, opened in 1928 as the preparatory division.

At the time its capacity was estimated at 400 seminarians, mostly on a college level, with a small number in the upper grades of high school. It included sleeping quarters, classrooms, dining facilities, study halls, an auditorium and recreational areas as well an entire wing devoted to faculty quarters.

The advanced seminarians in the theology division remained in the upper side complex, which has been expanded over the years.

A total of 19 buildings comprise the two complexes, which face each other across the campus.

Peak enrollment at St. Charles was 534 seminarians in 1960, according to a seminary history written in the 1960s, and the peak ordination year was 1937 with 55 ordained, according to the history.

“The Board of Trustees has been studying this for years now and we have looked at a variety of scenarios,” said the seminary’s rector, Bishop Timothy C. Senior.

One of the scenarios considered was consolidation on the college side, which wasn’t practical. Another scenario envisioned closing the entire campus and building a new smaller seminary at another location, but that wasn’t practical either when considering that merely building a new high school can cost $65 million to $70 million, Bishop Senior explained.

Also the seminary’s present location is easily accessible for those who use the other programs that utilize the facilities.

But consolidation is not being done because enrollment is dropping at this time, Bishop Senior emphasized. At 130 seminarians, it isn’t much different than when he attended 28 years ago. At this time St. Charles is actually growing, with incoming enrollment projected at a 20 percent increase next year.

The fact is the building has been underutilized since at least the mid-1970s and now even more so because many young men are college graduates when they enter St. Charles. Today most of the seminarians are in the theology division, already utilizing the buildings that will be retained.

“The 1928 building is enormous, I don’t think people realize how big it is,” Bishop Senior said. “Pragmatically, it was built to house a large number of men.”

St. Martin Chapel, which is attached to the lower side building, is itself huge. It was designed to hold 800 seminarians if necessary, and it is beloved.

“It is our primary chapel, and I never walk up the aisle without getting a lump in my throat,” Bishop Senior said, “but we have to look out for what is best for the men.”

Although the seminary is just outside the city limits it has always been known as Overbrook, the neighborhood technically located in Philadelphia across City Line Avenue.

“We love the Brook,” Bishop Senior said, “but the seminary has to be more. It is not a museum. It has a wonderful history and tradition, but for the 130 students who are here, what is important is today and tomorrow and the years to come.

St. Charles is now one of the few seminaries that continue to offer a fully self-contained college program in addition to the theology program, and some of the bishops who send students to Philadelphia do so for that reason, Bishop Senior noted.

“There is a value to it and it is not something to be given up lightly,” Bishop Senior said.

That is why Archbishop Chaput has appointed a task force, headed by Dr. Rosalie M. Mirenda, president of Neumann University, to consider what direction the college program should take in the future, if it is to continue. Recommendations are expected by the end of June with implementation in the academic year 2014-15

As of now the upper side building complex, including the Ryan Library and the pristine Immaculate Conception Chapel, are more than adequate for the present needs. With renovations they could actually serve up to 200 seminarians, according to an archdiocesan news release.

Not only will St. Charles continue to serve the seminarians, but the program will be expanded in 2014-15 to reinstate a Spirituality Year as part of the formation. The Spirituality Year, which will be mandatory for Archdiocese of Philadelphia candidates and optional for others, Bishop Senior explained, will allow seminarians to dedicate a full year for spiritual formation in discernment of their priestly vocation. It will help them be fully engaged during that time to the spiritual and human dimensions of the formation process.

The upper side complex is also sufficient for the other programs that utilize the seminary – the Permanent Diaconate Program and the Graduate School of Theology that offers graduate degrees and catechetical certificate programs for clergy and laity.

The immediate goal is the thorough renovation of the upper side for occupancy by all the programs including the Spirituality Year by the academic year 2014-15. The necessary renovations, which could cost as much as $30 million, are not contingent on the sale or lease of the lower side property, Bishop Senior said. That will be done through existing funds and fundraising.

Because the property is zoned residential, possible uses of the lower side could be either for senior housing or condominiums as examples, but at this point the Archdiocese has not put the property on the market.

From Bishop Senior’s point of view, it should not be an immediate sale. “If we just put it on the market and tried to sell it tomorrow, probably someone would come in and write a check,” he said. “That is not going to realize the value in the long term. At a certain point we will be working with the Building Committee of the Archdiocese, and it is important to know we want to work in collaboration with the township and community here in Lower Merion Township.”

Whatever the outcome, it is Bishop Senior’s hope that when the property is sold or leased, the funds will remain part of the patrimony of St. Charles and help continue its mission for many years to come.

It is also his hope, whatever the outcome, that St. Martin Chapel will remain a beloved part of the St. Charles campus.

“While the seminary evolves and takes on a slightly different look in the coming years, our four pillars of human, spiritual, intellectual and pastoral growth will remain strong,” Bishop Senior said. “We will be better poised than ever to prepare men to become servant-leaders who proclaim the Gospel. I believe the Holy Spirit has an idea in mind for us, and we just have to figure out what it is.”

NEXT: St. Patrick’s Day steps off with Mass before big parade