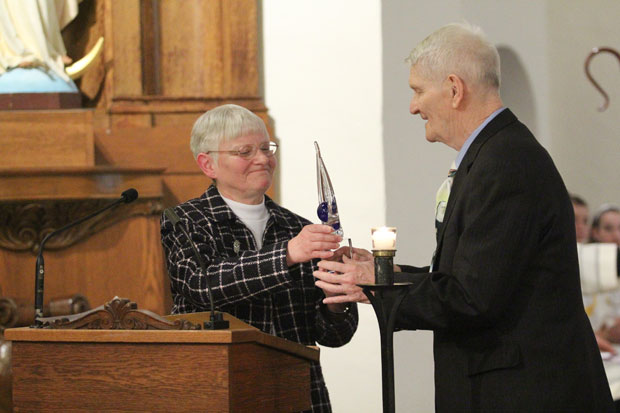 In 1984 St. Francis Vocational School was closing its doors forever. A “graduate” of the orphanage founded by Mother Katharine Drexel wrote a tribute to the facility and its Trinitarian Sisters who helped raise him, and sent it to The Catholic Standard and Times.

Staff editor Michael Houldin read the piece and liked it, and suggested to the editor that the paper publish it. “Sure, let’s run it,” said then-Msgr. John P. Foley. “Pay him $25.”

While the rate has not gone up much since then, thousands of news and feature stories have been written by that writer, Lou Baldwin, for the Catholic Standard, for Phaith magazine and CatholicPhilly.com.

He recalled his career as a Catholic journalist and his life’s connections to St. Katharine Drexel and her Sisters of the Blessed Sacrament after he received the order’s National Social Justice Award March 3 at the Bensalem motherhouse and shrine to the saint on her feast day.

(See a photo gallery with 10 photos from the day)

That first article, Baldwin said, “was the best thing I ever wrote because it came from the heart.”

But it wasn’t the last. Later in 1984 Baldwin was laid off from a job he didn’t like anyway. But with his wife Rita and nine children to support, he needed work. So he headed to The Catholic Standard and Times to inquire about a job. Though a position was not immediately available, staffers remembered Baldwin’s talent.

Cardinal John Krol had asked the paper’s new editor, Father David Givey, to publish material on the life of Mother Katharine, whose cause for canonization was proceeding in Rome. Baldwin was invited to work on the project, which became a supplement in the newspaper and a book, “Called to Sanctity: The Formation and Life of Mother Katharine Drexel.”

Moved as much by the invitation as the providential connection to the saintly Philadelphia socialite turned religious, Baldwin accepted. After writing the piece, he began working as a full-time staff writer.

What followed were 16 years of interviewing subjects from cardinals to governors to ordinary people of devout faith from all walks of life. Although he technically retired from full-time work in 2002, he continued to write several stories a week on a freelance basis up to the present. He also wrote another book on St. Katharine after her canonization in 2000, “Apostle to the Oppressed.”

Of all those stories, his favorites are the ones of people who “through their ordinary lives really live out the love of God,” Baldwin said.

The theme of love for God and service to His people was a consistent theme during the day. Archbishop Charles J. Chaput celebrated Mass for a capacity congregation of some 300 people, along with half a dozen priest concelebrants in the chapel where St. Katharine once prayed, and the two people who received divine miracles that led to the canonization, Amy Wall and Robert Gutherman.

The 25-member children’s choir from St. Katharine Drexel Regional Catholic School in Holland led the congregation in sacred music for the Mass.

In his homily Archbishop Chaput noted that even at age 84, St. Katharine spoke of “how far I am from being in the image of Jesus,” how much she needed conversion. The message, the archbishop said, is that St. Katharine recognized that everyone needs “to get converted again and again. The pattern of life has to be ongoing conversion, or it isn’t real. The Lord desires our conversion more than anything.”

“A saint is a symbol of the life God calls all of us to,” he said, a life of holiness that is best nurtured in families like the Drexels.

The Archbishop drew the connection between the holiness of St. Katharine and her family and their generous outreach to the poor and marginalized of society. St. Katharine’s ministry and considerable family fortune were dedicated to rteaching and serving African Americans and Native Americans, as the Sisters of the Blessed Sacrament continue to do.

In remarks presenting the seventh annual National Social Justice Award, Blessed Sacrament Sister Patricia Suchalski said the award is presented to a person of high spiritual and moral caliber, and one “willing to do whatever is necessary to bring about a better world of peace and justice for all.”

Through his work, Baldwin “has brought a consciousness to people who would not have otherwise understood the depth of the need to help the oppressed, particularly of the black and Native American people,” Sister Suchalski said. “His books and newspaper articles are a tremendous tool for evangelization across the country today.”

She noted that the orphanage where Baldwin was raised was actually founded by St. Katharine and her sisters, Elizabeth and  Louise. “You are a living testimony to the fruit of their work,” Sister Suchalski said.

Baldwin added that indrectly hiis childhood “gave me my greatest gift in life” because a friend of his in the orphanage in later years introduced Baldwin to the young woman who would become his wife, Rita.

He drew parallels, as the archbishop did, to continual growth in faith and a dedication to doing good works of service as leading to the holiness that St. Katharine possessed.

“I believe St. Katharine, although a saint by her own virtue, was influenced by her wonderful family and other wonderful people in her life,” Baldwin said. “I was astounded by all the good work that one family did.

“But there was more to Katharine Drexel than her very real work with the poor and oppressed. All of her life was spent as an evangelist. Everything she did was to bring people to God.”