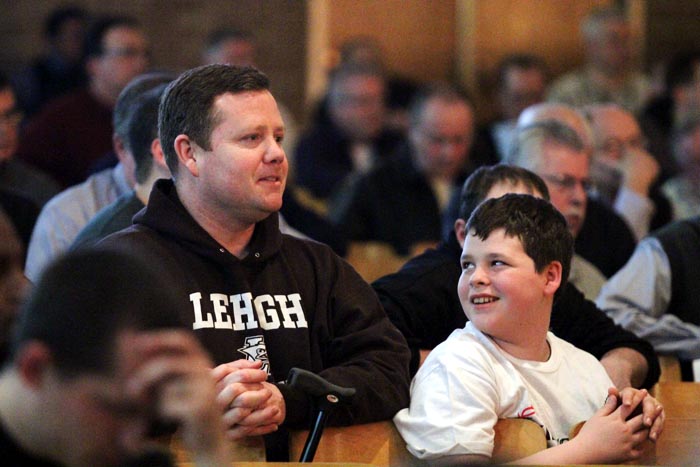 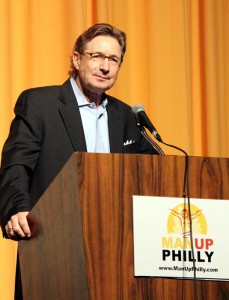 It would not have been surprising had the fifth annual Archdiocese of Philadelphia Men’s Spirituality Conference held at Archbishop Ryan High School on March 2 had a dramatic drop in attendance this year. Because of budget cutbacks the archdiocesan office that usually runs the event turned it over completely to a lay group.

Lower numbers would have certainly been understandable but it didn’t happen. The conference was run by Man Up Philly, and if you are looking for an example of dynamic grass-roots spirituality in the Archdiocese they surely qualify.

Not only did they maintain conference strength they increased to 1,200, which is more than 20 percent higher than last year’s turnout.

Man Up, which is especially known for sponsoring Gospel reflection groups in 60 parishes at this point, hit the ground running, but it was touch and go at first.

“Three months ago we had 200 registered,” said Eustace Mita, who chaired the conference. “We wrote to every pastor and we started giving pulpit talks. The Philadelphia Archdiocese is alive, well and vibrant.”

It helped a lot that they had an A-list of speakers: Christopher West, who is a bestselling author and teacher on Blessed John Paul II’s Theology of the Body; Jim Towey, president of Ave Maria University and former attorney for Blessed Teresa of Calcutta; Richard Lane, a convert who is featured on many Catholic national media programs and in the press; Don Saleski, who played in the NHL for nine years, including a stint with the Philadelphia Flyers; and Archbishop Charles J. Chaput, who was celebrant and homilist for the closing Mass of the conference.

“You have to have a personal love for Jesus Christ,” the Archbishop told his all-male congregation. “It’s a question you have to ask yourself,” he said, paraphrasing the Greatest Commandment: “Do you love the Lord with your whole heart, your whole mind and soul?”

Earlier in the day, some reflected on the program.

Mark Pennington, who was representing both The Kings Men and St. Joseph the Worker Council Knights of Columbus, wasn’t surprised at the increased numbers. “I anticipate growth,” he said.

As for the speakers, his favorite was Christopher West, especially through “his teaching on the catechism and what it means to be a Catholic man in today’s society. The power of his words is always 100 percent on the mark.”

Anthony Stewart, a member of Our Lady Help of Christians Parish in Philadelphia and St. Leo Council Knights of Columbus, hasn’t missed a conference to date.

“I really loved Jim Towey,” he said. “He made me feel good about being a Christian man. I especially liked his experiences with Mother Teresa and with her touching Christ by touching a dying man.”

On the other hand, for Santo Ferraro, this was a first, which is to be expected, because he is a candidate who will be received into the Church at the Easter Vigil at St. John the Evangelist Church in Center City.

“I came because I am interested in growing in my faith,” he said. ”My grandfather was Catholic; I was baptized Lutheran but not raised in any faith. I became interested because my fiancée, who is Ecuadoran, has a strong Catholic faith. This program is amazing; this is the right place for me.”

Man Up Philly isn’t going to rest on its success, now that the day is over. “We will meet on the first Tuesday of every month at St. Mary Magdalen (Media),” Mita said. “It is all about Jesus.”

NEXT: Teens enjoy day of fun, prayer to aid their public witness of Catholic faith