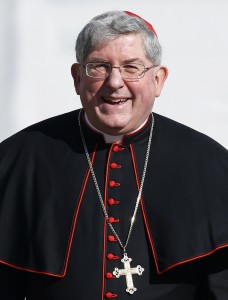 VATICAN CITY (CNS) — Online betting and trending sites were not the only outlets posting their papal predictions. Italian newspapers are historically the boldest and most confident in their daily speculations and conclave scenarios.

As cardinal electors disappeared from the media spotlight when the conclave started March 12, the rumors and theories mutated and multiplied.

Cardinal Thomas Collins of Toronto joked the day before he headed into the conclave that he was “going to have a big plate of ‘carbonara’ (pasta) because by the third day of the conclave, if we don’t elect a pope they will start feeding us bread and water.”

The most frequent story line put Cardinal Angelo Scola of Milan as the clear front-runner, even surmising he would have from 30 to 40 supporters in the first round of voting, which was expected to happen the afternoon of March 12.

The cardinal most often cited as the Italian cardinal’s main contender was Cardinal Odilo Pedro Scherer of Sao Paulo.

And many Italian papers, which like to see the world through the lens of their national obsession — soccer, predicted it would come down to being “a match between Italy and Brazil.”

Those reportedly expected to garner a significant number of votes in the first round included: Cardinals Marc Ouellet, the Canadian prefect of the Congregation for Bishops; Timothy M. Dolan of New York; and Sean P. O’Malley of Boston.

Cardinal Philippe Barbarin of Lyon, France, told journalists that in 2005 they saw then-Cardinal Ratzinger as a clear candidate and favorite going into the conclave.

“Last time there was a person of substance, three or four times superior to the other cardinals,” he said. “It’s not like that now.”

He said perhaps from three to 12 other possible candidates would be needed to choose from.

“Up to this point, we don’t know anything; we will have to wait at least for the results of the first ballot,” he said March 10.

Cardinal Andre Vingt-Trois of Paris also said he thought there were about six possible candidates going into the conclave.

Though the journalistic consensus was that Cardinal Scola had the most solid backing going in, the field was still wide open.

That’s because papal pundits were unsure whether Cardinal Scola would be able to get the two-thirds majority needed to elect a pope — 77 votes of 115 electors.

Apparently there was a large block of “undecideds” — numbering as many as 50 electors, said Marco Politi of Il Fatto Quotidiano newspaper.

Those undecideds were going to be the decisive factor, many said, though no one could make a guess where their vote might ultimately land.

That amount of unpredictability — a nightmare for soothsayers — was part of the reason Politi called the 2013 conclave “even more difficult” to pin down than those in recent years.

La Stampa’s Andrea Tornielli, who has a track record of successful forecasts, said “This time the situation is much more uncertain.”

Cardinal Norberto Rivera Carrera of Mexico City said he thought it was a good thing there was no one clear winner before the conclave.

As of March 11, there “has been no majority” agreeing on what the next pope should be like or who he should be, he told La Stampa, an Italian daily.

“We thank God for this diversity. That way each person will draw up his own profile” of the perfect pontiff, the Mexican cardinal said.

However, the lack of a common candidate and the “diversity of thought” wouldn’t necessarily mean a long drawn out conclave, he said. “We will come to an agreement very soon.”

One common scenario was if the conclave were short, say, a successful ballot after three or four tries, the winner would be Cardinal Scola, a respected theologian who has been dedicated to interreligious dialogue.

If the voting extended past eight or more ballots (past March 13 or 14), the story went, that would signify opposition to the Italian favorite had coalesced, making way for a contender.

Or, as if the drama and suspense weren’t enough, a dark horse or “compromise candidate” would emerge over the week to break any hypothetical deadlock between two entrenched favorites.

Given the widely different prognostics, headlines were unhelpfully claiming the conclave would be either “short” or “long.”

Cardinal Schonborn said March 10 he thought the conclave would be a quick matter of just a few days. He said he found the week of pre-conclave meetings to have been helpful and a “rare experience of a spirit of fraternity.”

Cardinal Thomas Collins of Toronto joked the day before he headed into the conclave that bland food could be what pushes the cardinals to a quick consensus.

He told journalists that he was “going to have a big plate of ‘carbonara’ (pasta) because by the third day of the conclave, if we don’t elect a pope they will start feeding us bread and water.”

PREVIOUS: Called by name: Keep this list ready when new pope is named

NEXT: Black smoke: No new pope on first evening of conclave