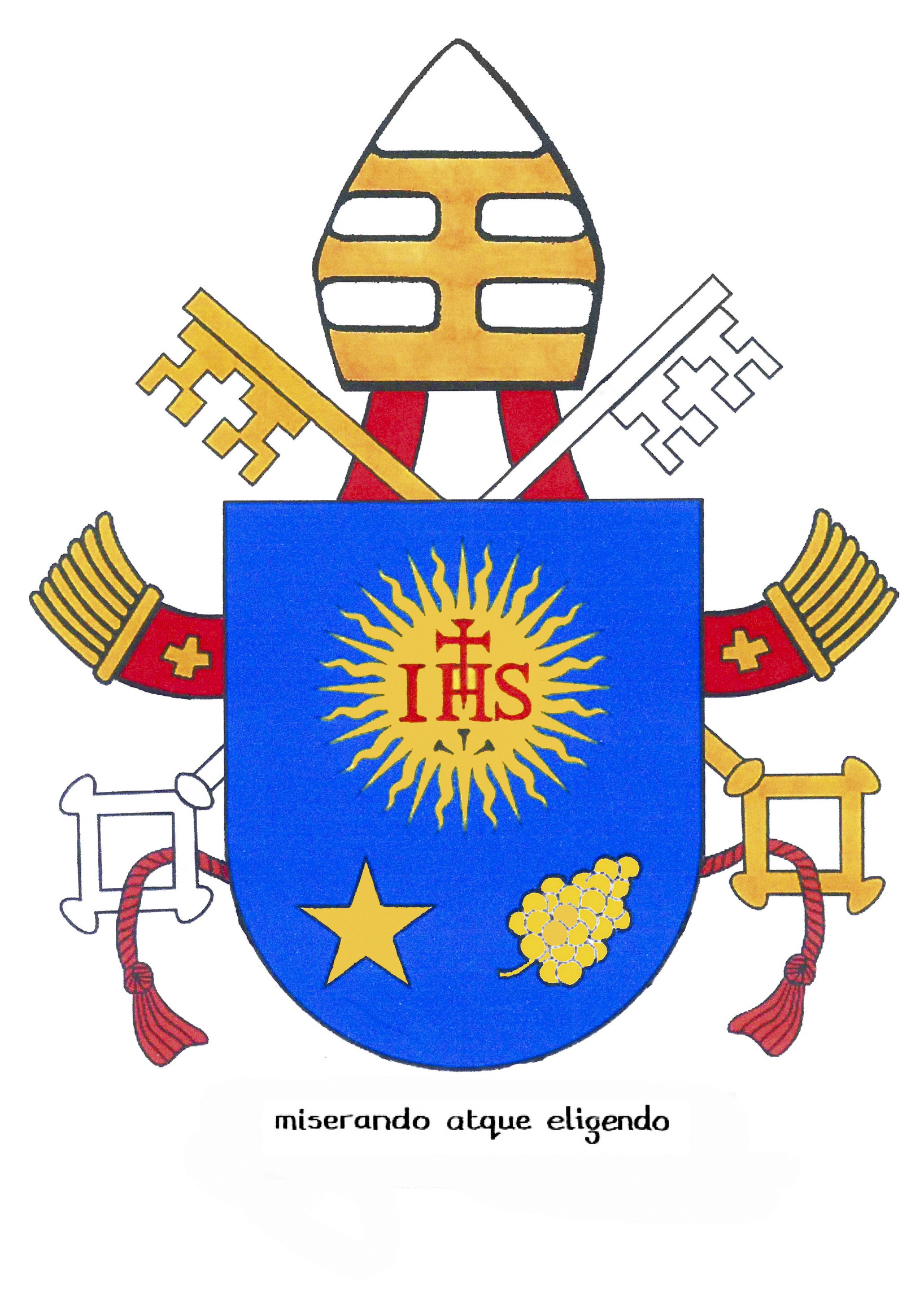 VATICAN CITY (CNS) — Pope Francis’ papal motto is based on the Gospel account of “The Call of St. Matthew,” the tax collector, in a homily given by St. Bede the Venerable.

The pope decided to keep his episcopal motto and coat of arms for his pontificate with just a few minor adjustments in line with a papal emblem. For example, the blazon adds the bishop’s miter and the keys of St. Peter.

The silver miter was something Pope Benedict XVI established in 2005, putting an end to the three-tiered tiara that, for centuries, had appeared at the top of each pope’s coat of arms.

The simple, more modest miter has three gold stripes to mirror order, jurisdiction and magisterium, and a vertical gold band connects the three stripes in the middle to indicate their unity in the same person.

The Holy See’s insignia of two crossed keys, which symbolize the powers Christ gave to the Apostle Peter and his successors, is on the new papal coat of arms and has been part of papal emblems for centuries.

The papal emblem uses a gold key to represent the power in heaven and a silver key to indicate the spiritual authority of the papacy on earth. The red cord that unites the two keys alludes to the bond between the two powers.

Something Pope Francis seems to have changed is to have removed the pallium, the woolen stole symbolizing a bishop’s authority, to the elements surrounding the shield. The pallium was a new element Pope Benedict added to his coat of arms in 2005.

The new papal blazon contains the same symbols Pope Francis had on his episcopal coat of arms.

The dark blue shield is divided into three sections — each of which has its own symbol. On the top is the official seal of the Society of Jesus in yellow and red, representing Jesus and the religious order in which the pope was ordained as a priest in 1969.

Below are a five-pointed star and the buds of a spikenard flower, which represent respectively Mary and St. Joseph, according to Jesuit Father Federico Lombardi, Vatican spokesman.

The papal motto, like his episcopal one, is the Latin phrase “Miserando atque eligendo,” which means “because he saw him through the eyes of mercy and chose him” or more simply, ‘having mercy, he called him.”

The phrase comes from a homily by St. Bede — an English eighth-century Christian writer and doctor of the church.

St. Bede’s homily looks Mt 9:9-13 in which Jesus saw the tax collector, Matthew, sitting at a customs post and said to him, “Follow me.” St. Bede explained in his homily, “Jesus saw Matthew, not merely in the usual sense, but more significantly with his merciful understanding of men.”

“He saw the tax collector and, because he saw him through the eyes of mercy and chose him, he said to him: ‘Follow me.’ This following meant imitating the pattern of his life — not just walking after him. St. John tells us: ‘Whoever says he abides in Christ ought to walk in the same way in which he walked.'”

St. Bede continued: “This conversion of one tax collector gave many men, those from his own profession and other sinners, an example of repentance and pardon. Notice also the happy and true anticipation of his future status as apostle and teacher of the nations. No sooner was he converted than Matthew drew after him a whole crowd of sinners along the same road to salvation.”

Pope Francis was appointed auxiliary bishop of Buenos Aires in 1992 and became archbishop of the archdiocese in 1998.