Neither church nor state may redefine reality of marriage 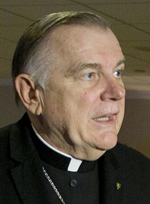 “If you call a tail a leg, then how many legs does a cow have? Four, because calling a tail a leg doesn’t make it one.” So said Abraham Lincoln thus showing a greater grasp of the reality of things than many in our culture today including not a few Harvard law school graduates and possibly even a majority of the Supreme Court should they decide to overturn DOMA and California’s Proposition 8 and thus effectively impose “same sex marriage” on the nation.

“Same sex marriage” has been advanced as a cause for equality — by providing the benefits to homosexual couples that have been afforded historically to married heterosexual couples. Not to give these benefits is alleged to be discriminatory. Of course, as fair minded citizens we do hold that no one should be denied a job or a house; no one should be subjected to harassment or bullying because of one’s apparent sexual orientation. We should oppose any and all unjust discrimination.

But, that the state recognizes and favors the marriage of one man and one woman as a natural fact rooted in procreation and sexual difference  is in no way unjust to homosexual couples any more than it is unjust to heterosexual couples who cohabitate without the legal benefits and protections of a civil marriage.

The state has long provided benefits and concessions to encourage or reward behaviors that serve the common good of all.  For example, businesses regularly receive tax breaks if they create more jobs in a particular area; and returning veterans receive benefits that those who did not serve do not.

The state in historically recognizing the traditional understanding of the institution of marriage as a union of one man and one woman does so to encourage and support, as social policy, heterosexual marriages because such marriages best provide the optimal conditions for the raising of future generations of its citizens.  And all honest social research as well as anecdotal evidence shows that children are “hard-wired” to be best raised by a mother and father who are married to each other.

To state this fact is in no way to wish to disparage those parents and often grandparents who at great sacrifice raise children in alternative situations. They need and deserve our support.  But for millennia, marriage between one man and one woman has been promoting what the social scientists call “kin altruism;” it other words, it’s about what’s best for children.

Only in the marriage of a man and a woman can “two become one flesh” (cf. Genesis 2:24) and thus create a conjugal society – or family – which provides that the individuals who give life to children should be the ones to raise them in a bonded and enduring relationship.

The push for so-called same sex marriage, if it prevails, will fundamentally change this – and in doing so will open a Pandora’s Box of unforeseen and, to be sure, unintended consequences – as the more permissive no-fault divorce legislation did some 40 years ago. Rather than see the institution of marriage as expressive of the complementarity of sexual difference between a man and a woman ordered for the raising of children, the proponents of so-called same sex marriage would now redefine marriage for all as existing solely for the gratification of two (and why just two?) consenting adults.

The Catholic Church teaches that while homosexual acts are gravely sinful also holds that having same sex attractions in itself is not.  The Church calls both homosexuals and heterosexuals to chastity, the virtue through which a person learns to govern his passions rather than being dominated by them.

But, certainly society can – and in recent years has come to – tolerate what consenting adults may do in the privacy of their bedrooms.  It is no longer seen as the purview of the state to punish what used to be called fornication and sodomy. But neither should the state involve itself in redefining marriage.

As an institution marriage precedes both Church and State – while both within their proper spheres can certainly regulate marriage, neither has the authority to create the meaning of marriage.  That meaning is found in the reality of things, the reality of the created order.

The Supreme Court justices would do well do remember Lincoln’s aphorism – even if you call a tail a leg, it’ll still be a tail. Calling the mutual sexual gratification of same sex couples “marriage” won’t make it so either.