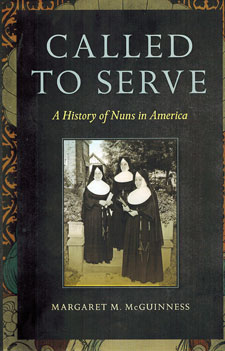 It started with 12 and how appropriate that would be. That was in 1727, when 12 Ursuline Sisters arrived in New Orleans, ­long before it was part of the United States.

They were the vanguard for a vast army of women religious in America that probably peaked at about 180,000 around 1965 and has since dwindled to 54,000.

As to the future, that’s in God’s hands.

(See related a commentary: Why so few religious vocations? Reasons are many)

Margaret M. McGuinness, professor of religion and executive director of the Office of Mission Integration at La Salle University, tells their story in “Called to Serve: a History of Nuns in America” (New York University Press, 2013, $35).

To understand their history you have to go back centuries, when convent life was much different than today. As McGuinness explains, all women religious were enclosed in convents away from the world.

It wasn’t until 1632 when Angela Merici founded the Ursulines, first as a lay woman, “to give charity where needed.” They ultimately, thanks to Pope Paul III and St. Charles Borromeo, emerged as a semi-cloistered congregation with public ministry.

By the time the United States came into existence, teaching sisters were well-established in Europe, and the first American bishops wanted teaching sisters but had little enthusiasm for cloistered orders.

Many of the European sisters were drawn from the upper classes, and life on the American frontier was particularly harsh.

When Mother Theodore Guerin came from France to found the Sisters of Providence of St. Mary of the Woods in Indiana she had misgivings, yet within four years she would write, “This land was for me no longer the land of my exile; it was the portion of my inheritance, and I hope to dwell in it all the days of my life.”

What is truly striking in the pioneer generations is the self-sacrifice and hardships the sisters endured. McGuinness tells us, “The Sisters of Charity of Nazareth, according to community legend, walked barefoot to church to save wear and tear on a valuable commodity, putting their shoes on before entering the building.”

The sisters’ willingness to go above and beyond what others would do also put them at risk, as example, “When the Sisters of Mercy accepted typhus patients at their Pittsburgh hospital in 1845, all except one of the sister nurses died of the dread disease,” McGuinness writes.
While many of the congregations had their origins in Europe some were strictly native born. Prime early examples are Mother Elizabeth Ann Seton’s Daughters of Charity founded in 1808, and Mother Elizabeth Lange’s Oblate Sisters of Providence, the nation’s first African American congregation, founded in 1827 and as such subject to prejudice not only from Protestants but also from white Catholics.

The Sisters, Servants of the Immaculate Heart of Mary, founded in Michigan in 1845, had as their principal foundress Sister Theresa Maxis, who was of mixed race ancestry. Because of her African American blood, her role was downplayed by congregation histories until recent years when it has been proudly acknowledged.

McGuinness divides her book into eight chapters, with the discussion of the four most prominent ministries — Serving through Education, Serving the Sick, Serving Those in Need, and Praying for the World — in the center.

One of the most interesting sections concerns the multitude of sisters who volunteered (or perhaps were volunteered by the congregation) to serve as nurses in both the North and the South during the Civil War.

Not every bishop appreciated this. As New York’s Archbishop John Hughes dourly wrote, “I am now informed that the Sisters of Charity in the diocese would be willing to volunteer a force of from 50 to 100 nurses. To this latest proposition I have very strong objection.”

One of the nursing sisters wrote, “Our duties (were) fatiguing and often disgusting to flesh and blood, but they were amply paid by conversions, repentances and the removal to a certain extent of certain prejudices to our Holy Faith.”

If anything the Civil War experience helped greatly to expand the Catholic hospital network. “Between 1866 and 1926 nearly 500 Catholic hospitals opened,” McGuinness writes.
The role of the sisters in education was enormous, especially in dioceses like Philadelphia where virtually every parish had a school fully staffed by sisters.

“The development of a comprehensive American parochial school system was realized in large part by the large number of women religious working for very little financial remuneration while ensuring that their schools offered a comparable education to their public counterparts,” McGuinness writes.

As to the contemplatives — sisters who lead a life of prayer, especially in Eucharistic Adoration — there seemingly has always been a struggle for recognition, something rather astonishing for a Church that proclaims the centrality of the Eucharist and the importance of prayer.

Bishop Richard Gilmour of Cleveland was probably not alone among the hierarchy in the 1870s when he harshly criticized the Poor Clares in his diocese, saying, “There is no place in the American Church for drones and non-workers as are the Poor Clares. They get and give not — consumers and unproducers. They have no place in the American Church in civil life.”

“Congregations of contemplative nuns may capture the imagination of some Americans,” McGuinness writes, “but it is difficult to document the ways in which they have either contributed to the growth of the Catholic Church in the United States or impacted the larger society.”

The final chapters of the book deal with the period of change in religious life with a much greater emphasis on social outreach than the other traditional ministries, as well as the changes in convent life itself and publicized disagreements on the part of some with stated positions of the Church, coupled with the dramatically diminishing numbers in the most recent half-century.

On the whole, “Called to Serve” covers much territory; not every congregation is mentioned because it would be impossible, there are so many.

McGuinness does not speculate on the causes for the vanishing numbers, only saying, “As they have since the first religious congregations began ministering among American Catholics, sisters and nuns will continue in ways that reflect the needs of both Catholics in the United States and the larger American society.”

No matter what the future brings, books like “Called to Serve” will be a reminder of the many dedicated women religious who, at great personal sacrifice, nurtured the flame of faith for generations of Catholics.

NEXT: Theology on Tap coming to a head in Northeast Philadelphia